Your World: Cultures And Architecture | EelKat's Guide To World Building - The Squidoo Series

Your World: Cultures And Architecture | EelKat's Guide To World Building - The Squidoo Series

What kind of architecture is there in your world? For most people, when you hear the word architecture the first thought is big buildings: pyramids, skyscrapers, Gothic cathedrals and the like. Architecture, however is so much more than big landmarks. Architecture is a part f everything that is built by people. This includes such things as streets, street signs, board walks on the beach, houses, home decor, landscape gardening, etc. So, when is comes to architecture in you world, have you given it any thought? What will it look like? 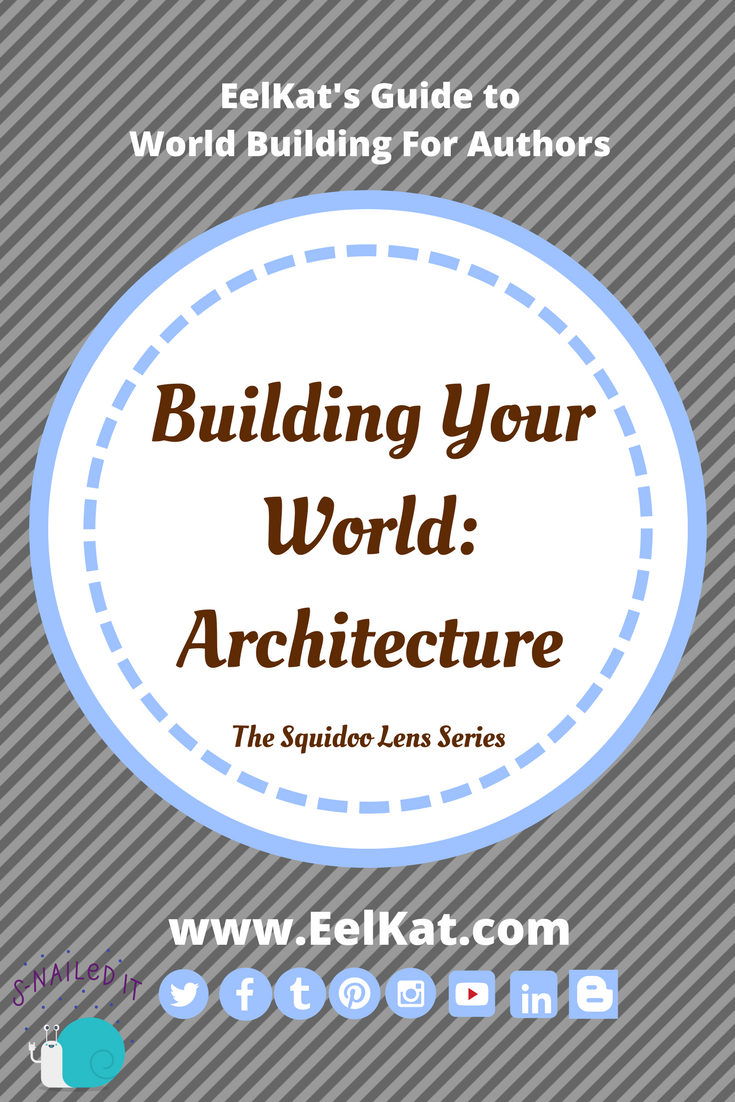 Architecture doesn't have to be big. Even a primitive tribe of cave men will have architecture. Just think of the cave drawings. How does one cave woman lay out her furs? Is it different than how cave woman #2 does it? Even the tiniest home decorating details are part of the architecture found in your world.

Don't forget that each city/town/village is going to have different styles, tastes, and culture too. A common failing in world creation is to have every village in every realm of your world be nearly the same. How many times have you read about a wandering wizard who goes from one village to the next and every village has the exact same tavern with a different name? Than he finds the same style blacksmyth in each village and the king always lives in the same style palace.

Does every village he visits have the same cobblestone streets? Why are some of them not brick? Or gravel? Did you know that many old time fishing villages paved their streets with ground clam shells? (Some still do, esp in Maine. These beautiful glisten white roads are rare, but amazing when you see them, and boy do they stand out and tell a story of the village.) Are any of your fishing villages paved with remains of the local shell fish? Did you know that from the 1800s into the 1970s the streets of Old Orchard Beach, Maine were paved with crushed clam shells?

Does every village in your world have the same tiny thatched roof houses? Are they always the same size and laid out in the same order? It's a common mistake, and few writers even notice they do it.

Now let's take a look at the real world. Say your wizard lives on earth. First he leaves England and heads to France. He'll probably travel through a few sheep farms and farming hamlets to get there. These are not likely to have taverns in them, and may not have more than 4 or 5 thatched roof houses. Once in France he'll have to cross pass a few dairy/cheese farms and grape vineyards, long before he ends up in the village. And once he reaches a French Manor-house (castle) he'll be dwarfed by the shear magnormous size of them. Now lets say he leave Europe and heads to China. He'll have to go past several cultural and architectural changes before he reaches China. Once in China he'll see such things as Pagodas and Shrines. Your wizard may very well suffer from culture shock.

Now let's take your wizard back to your fantasy world. How many cultures are there REALLY in your world? One? Two? Unless there has been a massive Armageddon event of some sort, it is not going to be believable that your fantasy world has anything less than two or three hundred cultures in it, at the very least. Now granted you don't have to mention all of them in your story, but neither should you at like they are not there either.

Let's look at that wandering wizard again. He has finally come home and settled down. Four or five years have passed since his traveled the world and now it's the time of your story about him. His young apprentice is looking around the house and spies a shelf filled with strange nick-knacks: a jade Buddha statue perhaps? Maybe an Eiffel tower shaped trinket box? A Aboriginal boomerang? These are all strange and odd architecturally shaped items, completely out of place and out of culture for your wizard, but they are things which he brought back with him from his travels around the world. They not only represent your wizard's lifestyle, but they tell a little bit about the various cultures in the world as well. They also tell your reader a little bit about your world's architecture without your story having to go to each place. All you wizard has to do is retell a quick two or three sentence long tale about what the item is. You now have far away places for your apprentice to dream about.

Take a look around your own bedroom. What do you see? I'll look around my room. You know what I see? A French Louie style chair. A tapestry from Persian. Several kimonos from Japan. A Mongolian sheepskin coat. Bamboo curtains. A Spanish model pirate ship. A bright colored charger (plate) from Mexico. I live on the Maine coast and a lot of local sea shells and drift wood are all over my room too. In my room you see local culture as well as culture from all over the globe. The architecture in my bedroom is influenced by many cultures. I'll bet your bedroom is a mix of influences too. Now look at your main character's bedroom. How has the cultures of his fantasy world effected the architecture of his bedroom?

What this all boils down too, is, do not forget when creating your world, that a planet is big and will have hundreds of societies on it, each with it's own style and habits, and those cultures will affect your characters even if your story never leaves your main characters bedroom. So know your world's architecture and make sure it's blended in.