When I go outside the first thing I notice is the sound of birds singing and chirping and twittering. Birds in the bushes. Birds in the trees. Birds on the ground. Birds in the air. No matter where you go, birds are everywhere.

Are there birds in your novel's world as well?

You remember what I said earlier about the importance of birds in Stephen King's Dark Half, right? 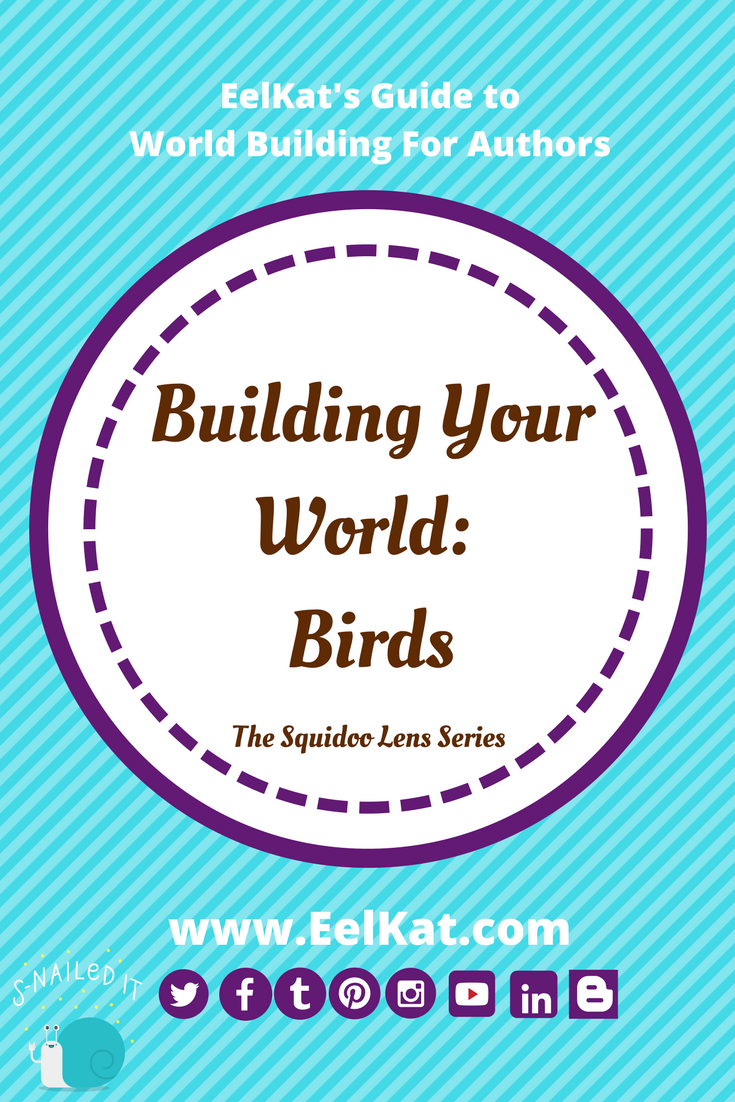 You don't want your characters to just be talking heads floating on a white page. You want them to become real in the reader's mind. You want them to come alive. One way to do that is to have them interacting with the world around them. Birds are one of the quickest, easiest, simplest ways to do this.

Your character can be walking through a marketplace and trip over a flock of chickens that suddenly runs across their path.

Or you character could be sitting down to a nice quiet meal, when his wife's parrot starts squawking up a storm and stressing him out.

Perhaps he's haggling in the marketplace with a vendor and is very seriously trying not to lose his temper, but just then a pigeon, sitting on the awning poops on his head and that's just the last straw.

They could be camped along the side of the road for the night, and a screech owl is keeping them awake.

Sailors (and pirates) on a ship know that long before they see land, they'll hear seagulls screaming overhead.

Question here is, are there birds in your world and if so what kind? And how do they effect your characters' every day lives? Superstitions. Omens. Many are bird based.

Short of a cello player following your characters through the forest, how do your readers know when danger is around the next corner? The birds. People who live off the land (since as nearly all fantasy characters) are very in tune to the birds. Birds will be the first warning that a storm is coming and from which direction. Birds will tell you is there is something ahead of you.

Birds will warn of danger.

Listen to the forest. Birds - hundreds of them - twitter all day long. They sing when they are safe and happy... but the first sign of danger, they go dead silent. Medieval man knew that a silent woods was a dangerous woods - it meant a bear was just around the corner, or highwaymen were hiding in the bushes. Men knew to listen to the birds to know what lay just ahead of them down the road... but how often do authors write this all important skill into their novels?

Birds, like humans, have a very detailed and complex language system. Every twitter has meaning. I know personally know this because I spent many years studying birds and writing down their variations in tone and sound and what each means.

Modern man has lost the art of listening to birds, but Medieval man used the birds as a guide. When in a Medieval style fantasy you see characters walking through fields and forest and NOT using birds as their guides, I stop and ask, why didn't this author do their research?

Before the invention of clocks and calendars, it was birds who told man time and dates, but you'd never know this from the way most authors write.

Before tv weatherman, it was birds who told when it would rain and when it would snow. Every real life, real world man, woman, and child knew to watch and listen to the birds to get the daily weather forecast..

Did you know that today's calendar dates and season changes where calculated by bird migration patterns? Did you ever know that on September 1st of each year, a flock of some 300,000 blackbirds flies south for the winter, and pass over our house at exactly 5PM every single year?

Every single year on September 1st at 5PM I stand on the lawn and watch and seconds later they pass overhead, like a massive black cloud. There are so many of them in the flock that they block out the sun and the sky goes dark for the 3 or 4 minutes that it takes for the flock to pass by our house.

These birds have been using that time, that date, and that path for several hundred years, that we know of. No one told the birds what time it was or what day it was. They just knew the exact second of the exact day was time for them to leave and they left. All birds are like this. Like a well oiled machine all birds are that precise in their actions and movements. Because birds are so on schedule, Medieval man used birds to calculate time or day and time of year.

Did your wizard say he had to be home by 5?

Uhm. . . did you know that it wasn't until the late 1800's that people started measuring days by hours?

Yes, they did have clocks before than, but few people used them, and those who did use them, set them at any time they felt like setting them at.

Remember, like mammals, your world would not be complete without birds. Like mammals not every fantasy story needs birds, but if your characters are outdoors a lot, than they should be taking notice of the birds. Remember too, that if you are writing a pre-modern style fantasy that birds were very, very important to man's daily activities.

A pre-modern fantasy lacking in birds and without any character talk of birds in daily slang, will stand out as EXTREMELY not realistic.