GhoulSpawn The Crazed &
The Rose Garden of The Pink Necromancer 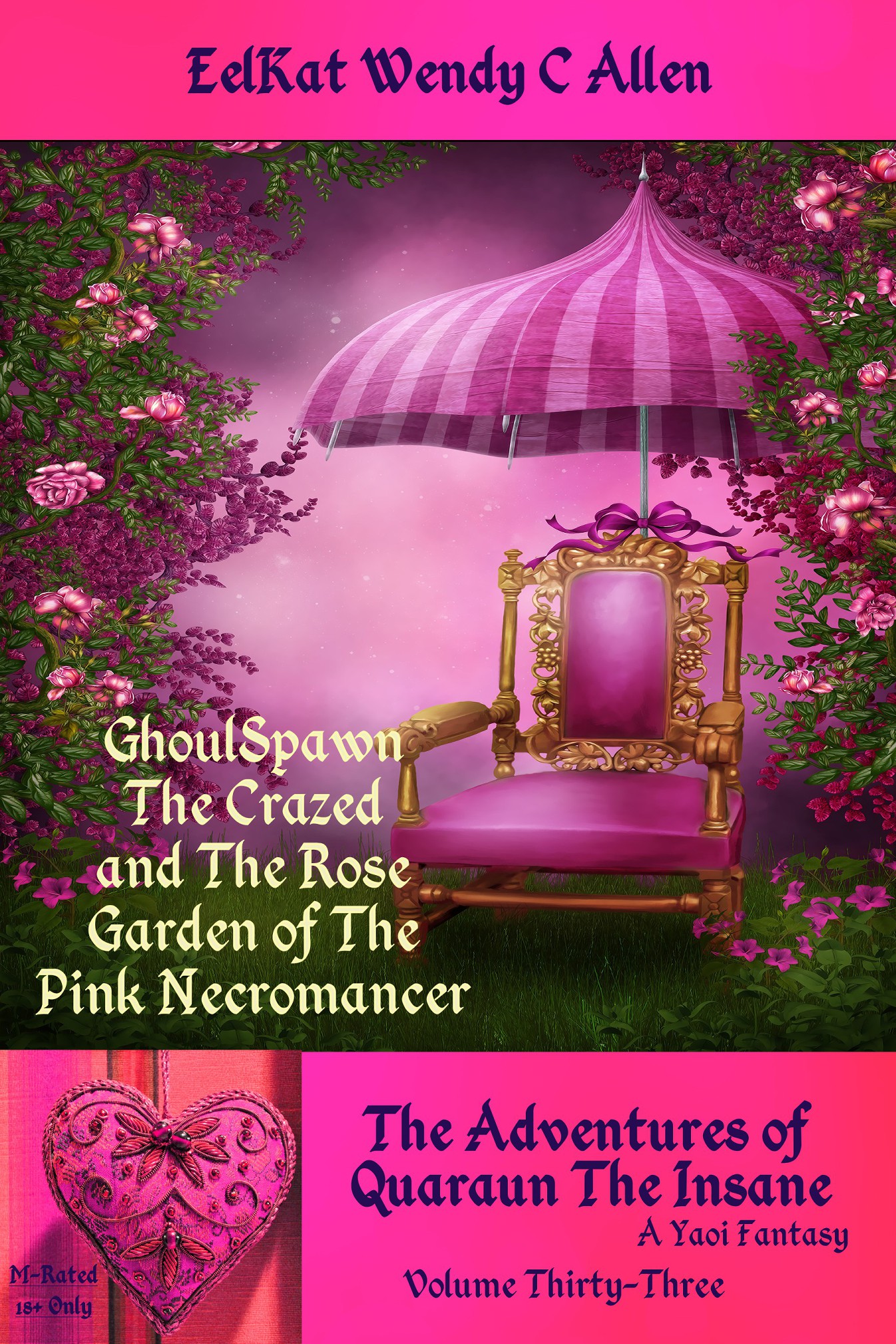 Volume 33:
GhoulSpawn The Crazed &
The Rose Garden of The Pink Necromancer

After being seriously injured, in Summoner of Darkness, half-Elf/half Demon, GhoulSpawn runs away.  Missing for three years and feared dead, GhoulSpawn suddenly arrives at Black Tower seeking HellBorne, unaware HellBorne is dead and Quaraun now lives in the haunted lighthouse, which he has painted pink.

Overjoyed to see his friend returned, the joy is short lived as Quaraun realizes something is seriously wrong with the Sun Elf, who is rambling about being hunted by pink flying goldfish, bowls of killer chocolate pudding, and armies of pink tuxedo wearing penguins.

With GhoulSpawn's sanity fast slipping away, and his health going with it, it quickly becomes apparent that he's been infested by an alien JellyFish larvae that has burrowed into his skull and is slowly eating his brain.

Unable to save his friend, Quaraun is forced to watch while the timid and gentle GhoulSpawn the Sun Elf dies in agony and his body taken over by the violent, domineering GhoulSpawn the Thullid.

Torn over not killing the creature that has taken over GhoulSpawn''s body, the Pink Necromancer calls up and army of dead rose bushes to save the world from a Thullid invasion.

A Garden Full Of Roses and Snap Dragons

Things You May Not Have Known about GhoulSpawn The Crazed

Though numbered as a later volume in the series, this is actually one of the very first Quaraun stories ever written, and was in fact the first story to feature Quaraun with his title "Quaraun the Insane"

GhoulSpawn's character was inspired by a car I owned in the 1980s. A 1974 AMC Gremlin. Orange with glow in the dark neon yellow flames painted on the sides. Thus why he wears orange and has phosphorescent neon yellow hair.

In The Twighlight Manor Series:  The time travelling mad scientist known as The Gremlin, is a much older and now mentally unstable, GhoulSpawn of the Quaraun Series

GhoulSpawn's character was actually created before Quaraun's, with him being one of the primary characters from The Wild Years, a 1987 novella of The Twighlight Manor Series.

He was originally created in 1982 as the Chief Science Officer on board the star ship, The VISION-D8, and was Captain Goldeneagle's best friend. Both of who worked in service to Planet Ptarmigan's Queen Miss Kitten The Eel-Kat.

GhoulSpawn is one of only three characters to appear in every spin-off series of The Twighlight Manor Series. Him being a primary character of each series. EelKat and Spriggan being the other two.

The Twighlight Manor Series says he opened the portals to allow Flamites (High Elves) the ability to travel between their houses (Twighlight Manor, Black Tower, and White Rock) without detection by Humans.

The Planet Ptarmagin Series says he opened the portals to help the Ptarmagin Kats have a way to travel from one galaxy to another in the blink of an eye.

The Quaraun Series says he opened the portals in search of his father, a Chaos Demon known as "The Ghoul".

The Chrystonite Series says he opened the portals to go back in time and stop the Battle of Ongadada from happening.

The reality: GhoulSpawn was born and raised in Hell, after his Sun Elf mother was kidnapped and raped by a Chaos Demon. He is unable to stay in any one time period or dimension long, due to his not having been born in a physical plane of existence. His presence in any time or place causes rips in the fabric of reality, known as "portals", which cause people to fall into worlds and times they do not belong in, inadvertently changing history no matter where he goes. He spends his entire life desperately trying to find a way to close up these portals and prevent new ones from opening.