Lost In a Space That Isn't There:
Santa's Letter To Satan
(free chapter to read online of Bizarre Dark Fantasy Yaoi Novel) 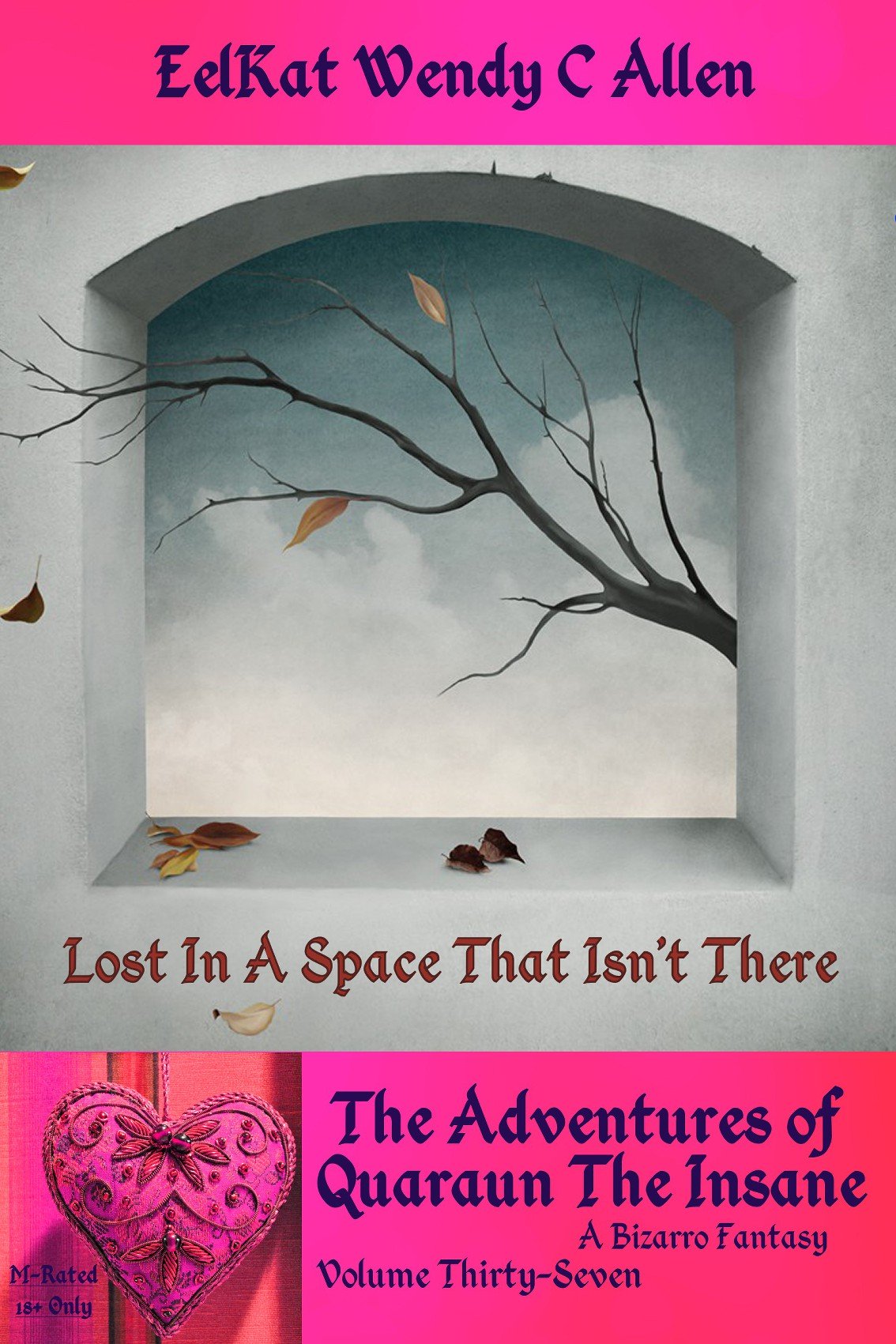 The Adventures of Quaraun The Insane
Volume 37 of 130

Lost In a Space That Isn't There:
Chapter ?

Most pages on EelKat.com are about writing Yaoi, and thus probably is NSFW; reader discretion is advised.

Lost in a Place That Isn't There is

NOTE: This novel is still being written and these online free sample chapters are unedited draft versions that may be very different from the final paperback book.

The Adventures of Quaraun The Insane
Volume 37 of 130
Lost In a Space That Isn't There
Full Chapter Index &
About The Novel:

For years now, Quaraun has listened to Unicorn talk about his life before his death and being turned into a Lich. Some of Unicorn's fondest memories were of his life living with his cousin Krumpas in Santa's Village, where he was a chef for the jolly old guy himself.

But Unicorn's stories of Jolly Old Saint Nick are very different from tales told to children, and tell of a mass murdering, baby eating Lich who masquerades as a gift giving good guy to hide the truth of who and what he really is.

Intrigued by Unicorn's off the wall tales of Santa's dark side, Quaraun agrees to go with Unicorn to visit Father Christmas and find out for himself if he even exists all and if he does, just what exactly it is that he is.

In a town where Grimm's darkest Fairy Tales are true, Quaraun meets the Easter Bunny, the Tooth Fairy, Jack Frost, and the bloodthirsty Big Red Man himself: Santa Claus.

The problem is... now that he knows where they are, they have no intention of letting him go back home. Getting to the North Pole is a lot easier than escaping it...

Why It Took So Long To Get This One Written & How I Got Back Into Writing It...

Lost in a space that isn't there is a very old story idea that has sat on the back burner for several years and was never plotted out or fully outlined. Every once in a while I would write a quick scene for it and then move on to one of the other novels instead.

In 2009, I attempted to write it for NaNoWriMo, (under it's original title "Jack Frost's Revenge") but as you know, that's the year Kendra Silvermander appeared in my life with a wild flurry of death threats and psychopathic insanity. (I would find out later that she had actually been stalking me since 2006, though I would not learn this until she attempted to kill me on November 14, 2013). 2009 was the first year I meet her face to face when she arrived to tell me I was not allowed to write about Santa Claus because she had created an "official" NaNoWriMo outline" about Chris Baty on a Camping Trip being attacked by Moose, Bear, and Lobsters and I had to write her novel outline or else, because she claimed she was the NaNoWriMo ML and it was her responsibility to dictate what novel members wrote or shoot them in the head for not obeying her orders.

Needless to say NaNoWriMo 2009 was the beginning of several years of police protection and FBI investigations. And thus, because of the psychopathic bomb building lunatic who blew my house up and cut my cats' heads off and nailed them to my door, needless to say I never found the time to write the novel about Santa Claus.

Due to the PTSD (which you would have to if you too had barely survived a crazed woman who built a bomb and blew up your house at 1AM in the morning, leaving the bomb at your bedroom door, to make sure you were totally trapped and engulfed in flames.)

Due to the PTSD I now have to live with, I have had many issue with going back into this novel, as writing it triggers memories of Kendra Silvermander and her countless, brutally, violent arrivals at various restaurants and libraries in Southern Maine, where she would arrive at my dinner table while I was eating and sudden, lunge at me from behind, punching me in the head and and screaming:

Each frantic war cry of "MY turn" in rhythm to her punching me in the head as many times.


To this day I do not know who this Kendra woman is, what her problem is, why she picked me as the target of her insanity, or why she persists in these vicious attacks every April/May and October/November of every single year.

If you've followed me long enough, you also know Kendra is the FBI's primary suspect on also being the infamous Kboards hacker.

Since I got beaten up by this weird so-called author, November 14, 2013, still no clue who she is, but she left me paralyzed for 5 months, during which time she hacked my KBoards account, my NaNoWriMo account, my website, my FaceBook, my Twitter, and other places, pretending to be me and written horrible stuff via my accounts. Then she created 52 fake Amazon accounts and left 52 fake and completely identical 1 star reviews on every one of my books.

I was paralyzed 5 months, relearning to walk 18 months... and I was offline for a full 3 years, and had no clue this woman had taken over all my online accounts or had done any of these things, until 2015. :( .

I'm crippled for the rest of my life, on a cane with one leg useless, and only have the use of 1 hand now, and permanent damage to my spine.

I used to publish a novel a month... now because of this still unidentified Kboards member, I've got $3million in medical bills, a bomb also blew up my house so living in my car, can barely move, and am lucky if I can get 1 book typed up a year. So frustrating.

It's been 4 years and I'm still in physical therapy, and it's a good day if I can stand up, let alone walk. Had to cancel the 2015-2018 book signing tour, and had to cancel all the monthly book releases from November 2013 to who knows when... still all canceled and we are closing in on 2018 now.

The Kboards hacker crushed my spine, my hip, my pelvis, and my knee. Tore up all the nerves and muscles. Got a $40million lawsuit waiting for when the FBI finally identifies who the Kboards hacker is.  FBI – Federal Bureau of Investigation  agent's contact info is on my website if you have any info about who it was who hacked my Kboards account 2013 to 2015.

Please give any information you have to the identity of this very dangerous, extremely violent, seriously mentally unstable criminal to:

But you can see, why it is I have such trouble going back into this novel and getting it beyond the basic idea.

The early rough first drafts of two chapters (Santa's Letter to Satan and Going North To Head South) were a result of writing prompts found on Reddit, seen embedded below. Clicking the links to either of these pages, will take you to where you can see the original, very, very, extremely short smidget of a scene, that would later result in being expanded to the chapters seen here.

WP] Satan is used to getting mail meant for Santa, but one day Santa gets mail that's meant for Satan.(WRITING PROMPT)

WP] Satan is used to getting mail meant for Santa, but one day Santa gets mail that's meant for Satan.WRITING PROMPT

[WP] Satan is used to getting mail meant for Santa, but one day Santa gets mail that's meant for Satan. from WritingPrompts

I've been planning to write a Christmas novel for the Quaraun series and never got around to doing it. Thank you for this prompt! I'll be expanding on this scene over the next few weeks to see if I can work it into a plot for a Christmas story for Quaraun. {{{HUGS}}} This prompt was just the kick in the pants I needed to finally get it started!

[WP] Two seemingly contradictory conspiracy theories turn out to be true: Antarctica is a seal in an ancient demon prison, and a wall of ice which keeps us on the flat Earth. Earth is the prison. Humans are the demons.(WRITING PROMPT)

[WP] Two seemingly contradictory conspiracy theories turn out to be true: Antarctica is a seal in an ancient demon prison, and a wall of ice which keeps us on the flat Earth. Earth is the prison. Humans are the demons. from WritingPrompts