Where do you stop describing the appearance of a character you're introducing? from r/writing

For me, often it depends on the character in question, but as a general rule, descriptions are sparse and very minimal. Never in info dumps, and often just one line in this chapter, another line in that chapter.

For example, I've one character who I describe only 3 things: his 4 foot long white hair that is constantly getting in his way but he refuses to cut it because of a superstition that it makes him powerful, his icy blue eyes that are so pale they appear to be white, and his insane over the top neon bubblegum pink sequined dresses and feather boas.

He's very vain and obsesses, obsessively over his clothes. He clothes are generally not described outright, but instead are mentioned in passing throughout the story, in phrases like: he stopped talking to adjust the ill fitted pink sequined corset he had on just then stuck in between a dialogue heavy conversation. Most characters have no clothing description at all. This character only gets his clothes described, because his clothes are so over the top, outlandish, and eccentric, and show the reader that he has a very strong, bold personality. His clothes are as much a part of his personality as his temper. 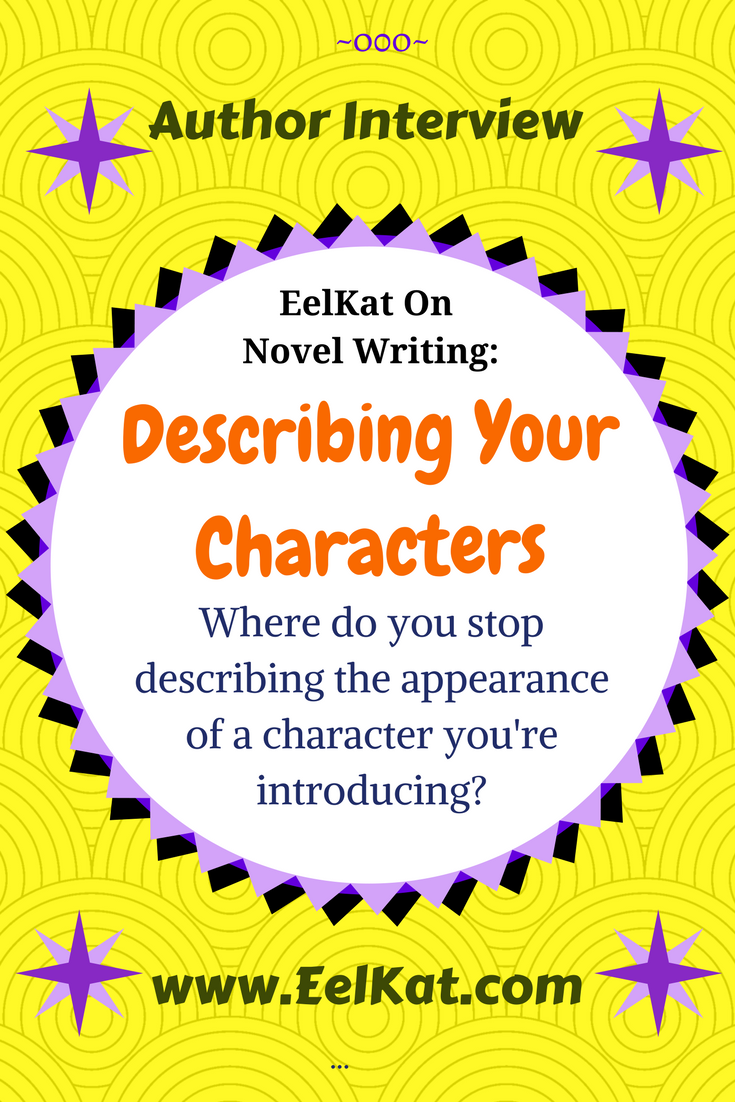 If he's arguing with someone, his height (or lack thereof) gets mentioned with something like he stood to address them eye to eye, even though he was only eye level to their chin.

His hair too is not directly described, but rather seen in the story within the action such as: while the rest of the group simply sat down on the ground to eat, he fussed for several minutes over where to put his four foot long hair. He couldn't eat with it in his lap and letting it lay on the ground beside him meant it would get full of twigs and dirt, a thing he wished to avoid as it took several hours to wash and dry.

Likewise his eyes get described in dialogue tags such as: he said as he glared at them angrily. They cowered in fear, not because they were scared of him, but because his ghastly pale eyes looked unnaturally creepy

He walks with a limp, from an old injury. Again, this is just one line here or there, in the middle of the action. Everyone in the room scattered and ran away. Quaraun, however, unable to run due to his lame leg, was quickly tackled by the guards.

His leg causes issues for his when travelling as well, and thus his injury gets described through the action, rather than via info dump descriptions: Quaraun knew they could easily reach their destination before sunset, had they not been required to stop every hour to let him rest his leg. The pain was no longer just in his knee, but now in his hip as well. He'd walked too far this time before resting it. Quaraun cursed the Human who'd run a sword through his knee, so many decades ago. He was also grateful that his friends did not just leave him behind and go on without him.

Quaraun gets more of these types of descriptive scenes then any other character, because he is the main character whom every novel is about.

Another character, (a demon) has hair and eyes that glow in the dark. Both these things get mentioned often, but the rest of his features are never mentioned at all, unless someone can get him naked (which is next to impossible as he's very shy) at which point the fact that he's a Cotswold sheep from the waist down gets mentioned. Like descriptions of Quaraun, the demon is also described very minimally and through random hints sprinkled in throughout the text. With this character, you see, descriptions of how he acts (shy, nervous, jumpy, jittery) instead of physical descriptions of what he looks like. He was badly abused as a child and is extremely paranoid over pretty much everything. Showing his fear filled nature is more important than describing what he looks like.

Another character, who spent decades growing his massive long dreadlocks, which he is VERY proud of and fusses over, gets many various descriptions of his hair throughout every novel, the fact that he has claws like an eagle's talons and teeth like a piranha gets mentioned from time to time, but rarely is anything else about him mentioned. Again, no info dumps, and instead using lots of small sprinkles here and there. His dreadlocks are described, because they are a big part of who he is. He is also a chef who obsesses over food, far more than is normal (on Gordon Ramsey levels) and so rather then descriptions of him, you often see instead, descriptions of the taste, flavour, and texture of food. You don't see food described when other characters eat. Only this one character. This shows the reader that food is important to him. His love of food is part of his personality.

Those 3 characters are the 3 primary characters and so are the only ones I put much effort into describing. Most everyone else just gets a one word gender and or species and or career/status/class assigned to them. Girl. Boy. Man. Woman. Elf. She-Elf. Wizard. Noblemen. Innkeep. Scribe. Merchant. Most characters, if they are described at all, have only very minimal, one line descriptions, such as "The pretty girl with a laughing smile, was deep in conversation with the Elven merchant." and the reader is left to imagine that any way they see fit.

So, you see, there is no point where I just drop in a straight up description. It's more just hints and clues dropped in here or there throughout the story.