The City of the Slushies 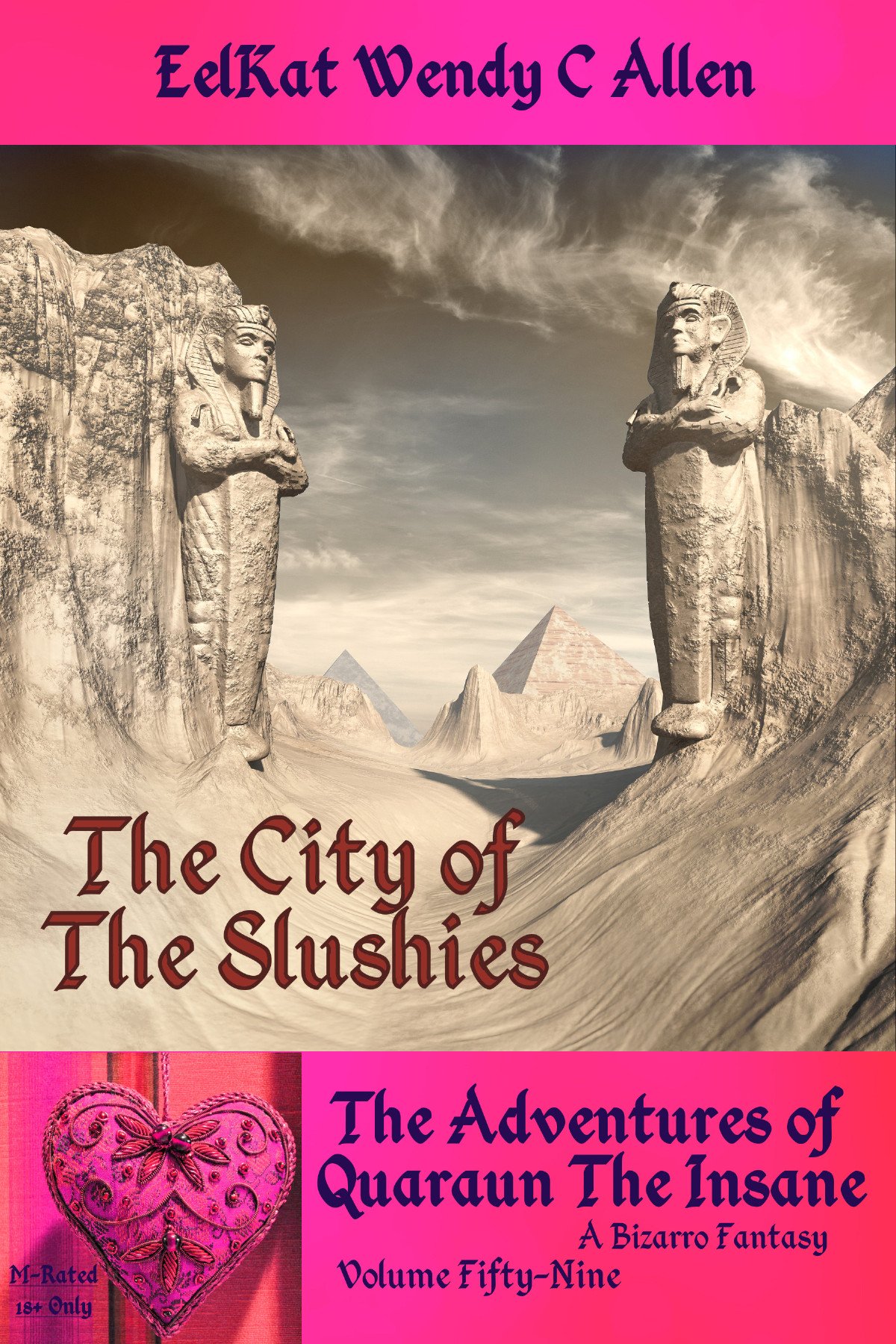 Volume 59: The City of the Slushies

Quaraun and Unicorn wake up in a frozen desert, with no knowledge of where they are and memory of how they got there.

Assuming that they have once again been sucked out of their own time and space by yet another of GhoulSpawn's unstable portals, the two wizards set off to find a way back home, and come across a strange isolated Human city, where a squid-headed priest controls all the water sources, forcing people to worship his god or die of thirst.

Slush Master Bazooloo of the 8 Arms has brainwashed the citizens to depend upon the magical properties of the life giving slushies. Generations have passed since the last Human saw a natural water source, and with Bazooloo handing out Slushies only to those he deems worthy of living, the citizens have divided off into sects, each controlled by their devotion to one flavour of slushie.

When Unicorn shows the people how to make their own slushies and introducing new never before seen flavors, disrupting the belief in the mythical 9th flavour, he is seen by some as the Slush God whose coming was foretold and by others as a heretic sent by the evil Slush Maid to destroy Bazooloo's reign.

NOTE:
These are not finalized chapters.

What you are seeing here is the unedited first draft as it is being written. The published version may be vastly different.

Expect what is seen here to change, be added to, and expanded upon during the editing and revision process.

Some parts may read awkward, as a simple sentence may be being used as a "place card" for an entire scene. The sentence will later be changed to a full scene in the published version.

Fire and Pearls by Brett Pierce

The premise of this story was created in a brainstorm session workshop at PortCon Maine 2017, in a panel called "Foundations of Worldbuilding" by Brett Pierce.

A group of about 60 people collaborated to create the basic structure on which this story was built.

Thank you to everyone who was part of this workshop and helped to create this portal world for Quaraun and Unicorn to visit!

I was in a 1-hour writing workshop last month and we were given the challenge to write a story based of a set of ideas that the group made together. The idea was to come up with a theocracy that was not evil and did not involve the worship of a deity.

In the end, we agreed to write this:

The world I'm dropping the story into is one I've already got several volumes published for.

The government system of the region is basically a group of wealthy, pompous bigot magic users (think, Ku Klux Klan, if they were Elf Wizards) who've declared every one who practices any form of magic (and you'd be surprised what they consider "magic" to be - like 1500s witch hunters they can "see" "magic" in everything, so long as it serves their purpose) without their permission, to be a traitor and must be executed. They started out as a wizarding guild, but then they killed off all the other guilds are are the only guild left (thus people refer to them simply as "The Guild"), they went on to over throw the government (a quasi-clanish-tribal-monarchy system) and declare themselves the law of the land.

I'm not sure what type of government you would call it - it's kind of like gangsters of the 1920s, where big bullies who can out bully the other bullies end up in power. Basically they are a gang style terrorist group that is slowly taking over all the governments.

They rule things similar to the Vogan in Hitchhiker's Guide, where they have documents and papers for everything and won't allow anyone to make a move without long lists of paperwork approvals and people who don't get the proper permits for something are executed. They are kind of terrorist/gangster/bureaucrats who are Elf wizards and basically want all none Elves dead ad all wizards who are not them dead because they don't want the competition.

So, tossing a wacky slushie worshiping theocracy into the mix... I don't know how the Guild is gonna react to that. They are used to overthrowing small "tribal" monarchies (not medieval style monarchies of kings in castles; rather I based them off the small clan kings of ancient pre-Celtic Scotland, which were very tribal). This'll be my first time writing them vs a theocracy and it ain't a traditional theocracy.

I have no plot, plan, or outline so no clue how this story is gonna end up going.

Junta: A group that takes control of the state after overthrowing the government by force.

Cool. Now I have a name for what type of government The Guild is.

Got An Writing/Author Related Site Or Blog? Want To Embed These Quotes, Memes, Infographic, and Fact Sheets On Your Site? Here's How:

These pages are currently being built. The links will go live as each page goes online.