The "Take an Interest in Pinterest" Challenge Is Here!

I must tell you guys what happened this week...

Back in November, I think it was, I had posted here to show you guys that I had started using Canva to make my pin graphics.... 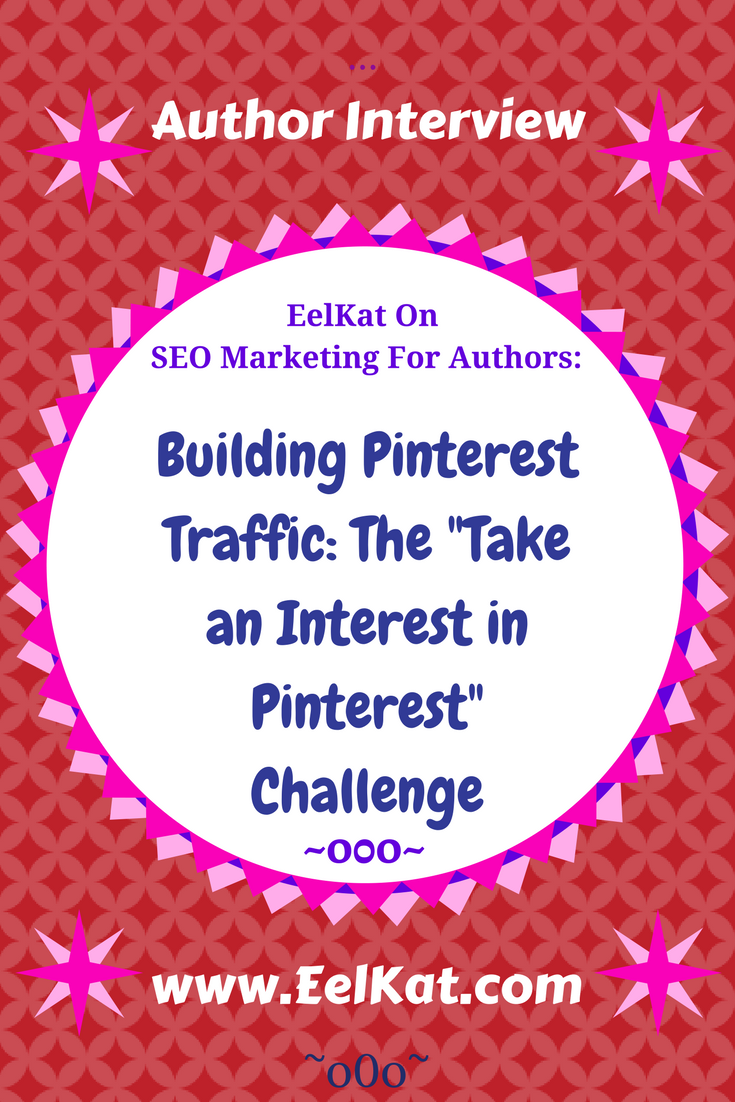 So, I started my Pin account back several years ago, but used it just to repin other people's pins. My account was maybe 5 years old and had about 30 followers and me following 1,000+ people. And never once had I created a pin. It was all me "collecting" my fave pins other people had posted. In fact the fact that I could post my own pins, never even occurred to me before this SBI thread was started!

It wasn't until this thread started last summer, that I realized I could make my own pins. But, summer was busy for me, so I wasn't able to put into action, the things I had learned here, until October, the same month as the https change.

Now, my site is VERY text heavy and is focused on "how to write novels" articles and sample chapters of my novels. So, it doesn't lend well to pinterest, right? Which was something I had mentioned I was worried about... thinking Pinterest would never be a viable source of traffic for me, due to the lack of pictures.

Well, as a result of this thread, I ended up discovering various "quote pins" and "info graphic" pins, and one thing led to another, and I ending finding another author who had a site (hers was a Blogger blog) similar to mine. Like me she had "how to write novels" articles and sample chapters of her novels. She also had a blog post on how she used Pinterest to get traffic to her articles and showed samples of her pins.

What she did was, to make a simple pin image, that was nothing but colourful text on geometric colour blocks, made using Canva templates. They were simple, bold, and required no images. The text was simply, the title of the blog post, and the name of her blog. Nothing else.

Since late October, Early November, I have been creating one of these images for each of my new pages, and also going back to my old pages and creating images for them as well. I now have 300 pages on my site, with pin images, slowly working towards all pages eventually having it's own image.

Here's a few so you can see what they look like:

So, now for the first time (since Oct 2017) I am using Pinterest to promote my SBI site. Every time I create a new page (or update an old page) I now send it to pinterest, via pinning the images I made for the titles. I created a board specifically for that purpose "Writing Tips For Authors".

3 days ago one of my articles (an old one that never gets traffic) suddenly gets 20 views in the space of about 5 minutes. At first I assume someone tweeted it and think nothing of it. It did not occur to me that the night before, I had made a pin image for that very aticle and pinned it to my pin board.

A few hours later I'm checking my site stats and this page now has 70 views. I'm still thinking twitter at this point since most of my traffic generally comes from twitter.

I notice at this point that 2 other articles, both several years old and barely getting 1 to 2 views a month, are also fast rising in views. They too had been updated with these new text images and pinned to my board within the past few days. I still have not made the connection.

I go to Pinterest... I've suddenly gone from 35 followers a few days ago, to 400+ followers this morning! And those 3 articles... each has400+ pins to other people's boards!

I head back to my SBI traffic stats... those same 3 articles each got 400+ views in the past 2 hours!

I've heard people talk about how Pinterest traffic starts snowballing fast, when it starts, but, I've never seen it happen before!

I've got 3 pages of my site, all of then 3+ years old and almost never getting traffic, suddenly getting hundreds of hits in a matter of hour.... BECAUSE I added a text graphic to them, and pinned them!

I don't think I've ever seen such a big boost in traffic from seemingly so little effort.

I'm definitely going to start focusing more on Pinterest now that I've seen what it can do.

Thank you for starting this thread! I don't think I ever would have started using Pinterest at all, had I not started reading this thread last summer!

Where to find more info on my methods to writing Elf culture, Elf society, Elf ethics, and the Elven way of life (aka other writing related articles that started out in life as Reddit answers):