What Does "Top Left USA" Mean To You?
A Scottish Gypsy's Thoughts On American Slang Words


Today's question, comes from the SBI forum for web builders.

What Does "Top Left USA" Mean To You?

Does "top left USA" = pacific northwest to most folks?

Hi everyone,
I've been building the domain: http://www.beautifulpacificnorthwest.com for several years. I like the domain name well enough; I chose it back when putting the site concept (pacific northwest) in the name was considered best practice.

But, it IS a mouthful. On one hand, people search on the phrase, 'beautiful pacific northwest.' On the OTHER hand, the topic is incredibly broad. Good thing I enjoy it, however it'll take some doing to cover the pacific northwest from Vancouver Island BC to Portland Oregon (the arbitrary limits I thought I'd set, at least for the first 28 years lol).

I'm plowing full steam ahead because I like the topic. But, if there were some way to narrow the site concept to something more manageable (via Move-It), that would still meet (current) best practices, I'd prolly give it some serious thought.

These two names I have parked already:

BeautifulPNW.com - says the same thing, is MUCH shorter. Will everyone understand that PNW = pacific northwest? (Or at least, anyone who is interested in visiting the PNW) The area is so beautiful; I'm trying to provide the info tourists will need, as well as tons of beautiful photos. Changing to this domain will shorten the name, but will not shrink the topic.

TopLeftUSA.com - Same question: will it be clearly understood that the top left of the USA is the PNW? It's a little tongue-in-cheek. Is it a dumb name? The advantage of this domain name is that it can be as big or little as I like. I live in Port Angeles, WA, which is as "top left" as one can get. As the pages mount up, I can provide a wider and wider scope of information and photos.

With a site concept of pacific northwest, will moving the content to topleftusa (or beautifulpnw) result in any penalties for not including the site concept in the domain name?

Thanks in advance for whatever insights you can provide.

When I saw Top Left USA in the thread title, my first thought was that this would be a Trump rant, a social justice hissy fit, or some other "American gone cry baby" over the current politics type of web site.` 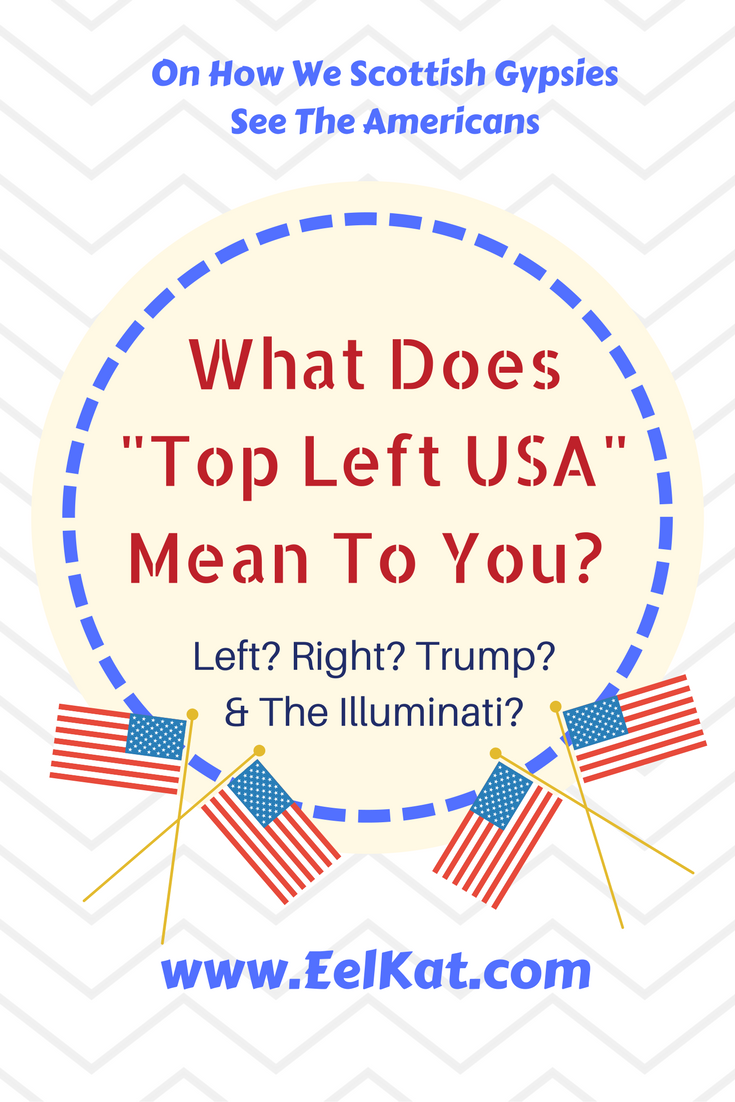 I'm not American (I am Scottish) and do not understand American politics, but people who rant on social media about politics are always screaming about left vs right. Calling themselves Leftists and Rightists and each hating on the other, and overall making fools of themselves as we non-American grab popcorn and watch Lefties and Righties battle about things that seem pointless.

I remain confused and baffled, because I have no idea what Left or Right even means, and every time I've ever asked on any forum, the only thing I get for an answer is wild hellfire fury of Lefts and Rights duking it out in anti-Left vs anti-Right hate feasts.

I have yet to ask an American:

"What does Left mean?"

"What does Right mean?"

...and actually get an answer.

Instead I get lots of conspiracy theory rants on Bush being a shape shifting reptilian alien, Obama being a demon in disguise, and Trump being secretly attempting to take over the planet, with all 3 of them being accused of working for the Illuminati.

I've come to the conclusion that in order to call yourself a Left or a Right, you must also have a very low IQ and be high on drugs, as I've yet to encounter any Lefts or Rights who has enough intellect to communicate coherently.

Of the two, it is the Rights who seem to be far lower in IQ and far higher in hysterical ranting of pro-violence, pro-kill everyone not them, but the Lefts are nearly as bad.

Either side is just as mindlessly violent as the other.

Why any intelligent person would want to join or be associated with either the Lefts or the Rights, is beyond me, as both seem to be little more then excessively violent, conspiracy theory prone, gibbering idiots with their heads stuffed way too far up their asses.

That was my mind's immediate reaction to seeing the words: "Top Left USA".

So if I saw TopLeftUSA.com I'd assume it a site about USA politics, likely one that glorified the top of America's Lefts, whatever that means and whoever they are.

I would epect a site titled "Top Left USA" to contain:

And other such similar ridiculouse bull shit the Rights and Lefts are prone to ranting about.

All we non Americans know about the Lefts and the Rights is what we see on the news about their violent terrorist marches at the White House, their attacks on the President, their storming into public events and shooting up gays and Muslims, and other horrible acts the Lefts and Rights do in the name of "being proud Americans". We also see them thronging viciously on social media, and the Lefts and Rights are some of the worst cyber bullies out their. They roam the internet in mass hoards and lash out in gangs cyber bully attacks on the FaceBook walls of gay people or Muslim people. They's attacked my own FaceBook account multiple times because I'm an author and my main character is a gay man. (Well, he's a gay man in their minds at least. He's actually neither gay nor is he a man.)

Here's a list of a few of the things the local Rights of Old Orchard Beach, Maine have done to my family:

All we non-Americans know about the Lefts and the Rights is that one side is Pro-Trump and the other side is Pro-Hillary, and they are both extremely radical and very violent, and no one likes either side because they are both just mean spirited bullies.

Non Americans would likely see that site name as a site that promotes American terrorists, because we non Americans generally assume the Lefts and Rights to be terrorists based on the way they glorify white power, Nazis, KKK, anti gay sentiments, anti coloured people sentiment, their pro-gun sentiments, and especially the way they post death threats to each other all over Reddit, FaceBook, and other social media.

Perhaps an American, would see your site name and understand it was a nod to a geographic location and not a nod to an American based terrorist group, but I doubt many non Americans would understand the geography hint and would think of American's infamous rival terrorist groups "The Leftists" and "The Rightists" first. Nears as we non Americans can tell, they both broke off of the Ku Klux Klan and are both just as deadly and violent and full of hate for everything and everyone they encounter.

With that in mind, my thought would be to not name my site something that could be mistaken as being connected with a terrorist group. In the eyes of us non Americans, Americas Lefts and Rights are among the most terrifying terrorist groups on the planet. The Rights especially, and the Rights may in fact be far worse even than ISIS.

Perhaps Americans do not see these groups that way. I don't know. All I know is America is a very small county (population wise). Only 300 million of the world's 8 billion people live in it, so if you are seeking a global/international audience for you site, naming it something that the majority of the planet associates with a terrorist group is going to cost you most all Europe, Asia, Africa, Australia, Canada, and Mexico, traffic.

You'll be removing 7 billion+ of the planet's population from being possibe traffic to your site.

That may not be an issue for you, if your site is mostly American traffic.

I'm not sure though, would Americans know "top left" refers to a geography location and not the leaders of the Lefts? I don't know.

I have never heard any non American use the term "top left" in referance the a geography location before. Don't know if Americans do it or not though.

So from a non-American perspective, I would think a site name with PNW in it would be far better, as it would not alienate you from your non American audience.