A common question I get asked is: “What do you think of putting flyers on cars? I can print up 500 of them off my printer for about $20 and there’s a WalMart just down the street. Wow! Just think, by the end of the week thousands of people will know about my book! Isn’t this a great idea? Why hasn’t anyone else thought of it?” 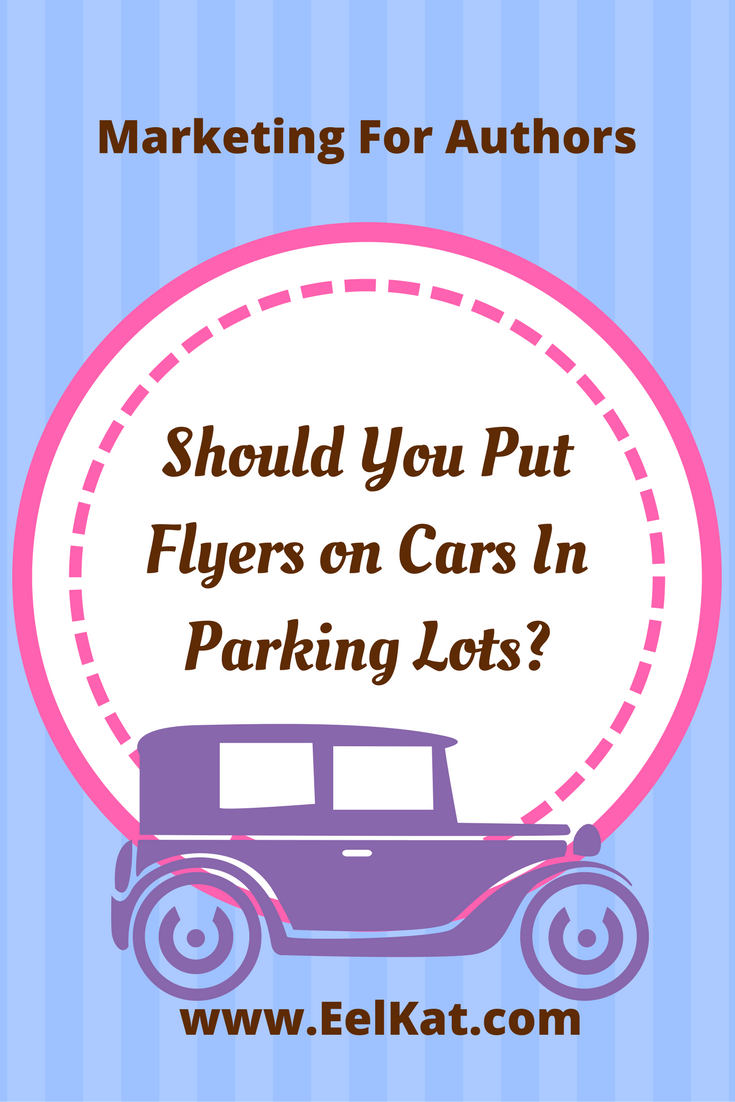 What do I think?

Flyers on cars works - IF you tape the flyers to your own car. Otherwise they could land you in jail.

If you get caught putting flyers on cars, LEGALLY the judge has the right to charge you a fine for EACH trespassing offence committed. In other words if you go to 1 parking lot and place 500 flyers on 500 cars, that is NOT 1 trespassing offence, but rather 501 counts of tampering with private property! The average fine for such an offence is $500, which means, the judge could make you pay 501 $500 fines for a grand total of a $250,500. Still think it’s worth the risk?

I tape a pair of flyers to my car windows - back doors. This works wonders as I get 30 or 40 people minimum gathering to look at my car every time I stop at any store (it's got 2.5 million beads and marbles glued to it and shimmers like a giant disco ball). My car is my best sales gimmick ever (wasn't intended to be that way, but I figured, hey, people are flocking to my car anyways, might as well take advantage of it and let folks know I've got a few books they can read.)

Putting flyers on other people's cars though - actually, there is a law against that, at least in Maine, and there's a $500 fine (to the town in question), in addition to any "no solicitation" fines the owners of the parking lot may have (most stores/businesses have "no solicitation" clearly posted on the front door and that includes cars parked in their lot, not just in their store!)

If you drive into WalMart and most other big box stores, you will see signs posted on lamp posts that say “No solicitation on premises” - these are targeted directly at flyers on windshields.

I knew one woman who got a restraining order put on her by the store in question, and I knew a guy who did jail time for it.

I've known people (more than once) getting sued by car owners, claiming the ink ran and ruined the paint on their white Cadillac (it was the same guy both times, same Cadillac, he won, because the car was his private property and putting a flyer on it, was classified as "trespassing").It was a 1973 Eldorado by the way. Gorgeous car, and yes, the ink really did bleed off the paper in the early morning dew and stain the paint. This guy lives down the street from me, fellow car collector, showed me the car, and there it was plain as day: a mirror image of the flyer "stamped" onto his nice white fender. Dr. Larochele by the way, yes, the man who inspired the character Rycliff Liore aka Caddie Larochele in my Twighlight Manor series. He was also the original owner of The Goldeneagle - he's the guy I bought it from. Now you understand why I write Caddie as utterly obsessed with the paint job of his car.

There was another time a guy called the number on a flyer to demand the company replace the wipers on his car, claiming whoever put the flyer on his car had broken the wiper doing so.

And when you read as many Amazon book reviews for self-published books as do, it doesn't take long before you know which authors are putting flyers on cars. How can you tell? By the 1 star reviews which read: "Don't buy books from this hack, he's been littering up the neighborhood with his flyers. I got one on my car this morning. Not only did I not buy the book, I'm making sure to tell everyone I can not to buy it. I came here to look him up on Amazon to make sure I warned people."

Flyers on car windows used to be a big thing around here, and for years it was not unusual to come out of the store to find more than one flyer stuck under your wiper. It got to be a hassle, most of them ended up on the ground as drivers would just toss them and drive off, and a couple of times it caused accidents as folks wouldn't always take them off before driving away and they'd fly up and block the view while driving.

Biddeford is the town that really started cracking down on it. Biddeford has a WalMart and a Target and a BestBuy and several other such places. Lots of big lots, with lots of cars. Biddeford became a prime target for every small business with an office printer. Do you know how Biddeford put an end once and for all to flyers on cars? By enforcing the $250 per item littering fine.

First the city boldly posted "Welcome to Biddeford - Do not litter. Fines $250 per item." These signs are BIG, BIG, BIG and they are posted on every street that crosses town lines. Than Biddeford PD recruited a whole new parking crew complete with 3 brand new aditional meter-maid cruisers.

Yep, the little meter-maids in their 3-wheel parking cruisers got busy collecting up every single flyer (which conveniently listed names, addresses, and phone numbers of the offending businesses) counted them up, and than sent bill for littering to the owners of the business - bills to the tune of 1 ticket per flyer and each ticket equaled a $250 fine. Small businesses found themselves owing the City of Biddeford several thousand dollars in littering fines.

Of course, people standing on the sidewalks smoking, also found themselves fined $250 for each but they dropped. Biddeford PD didn't exclude anybody when they started enforcing the no littering law. And the city is much cleaner now than it was a few years ago as a result, and nary a car flyer to be seen.

If you have a permit to do so and/or permission from the business owner, you can stand out front of a business and hand flyers to people coming out, but it's rare that a business allows this.

I don't know about other states, but putting flyers on cars is a great big huge ILLEGAL no-no here in Maine.

In short flyers on cars is nothing but bad JuJu. It's very bad for business.