Prologues:
Good? Bad? Ugly?
My Thoughts on Why I Hate Prologues


Where does this community fall on the issue of prologues?

Where does this community fall on the issue of prologues? from writing

Where does this community fall on the issue of prologues?

>>I’ve read that they should generally be avoided because readers are liable to skip them, and/or they’re often done wrong in the first place.

>>If it is necessary, so they say, it should be as short as possible. Thoughts? 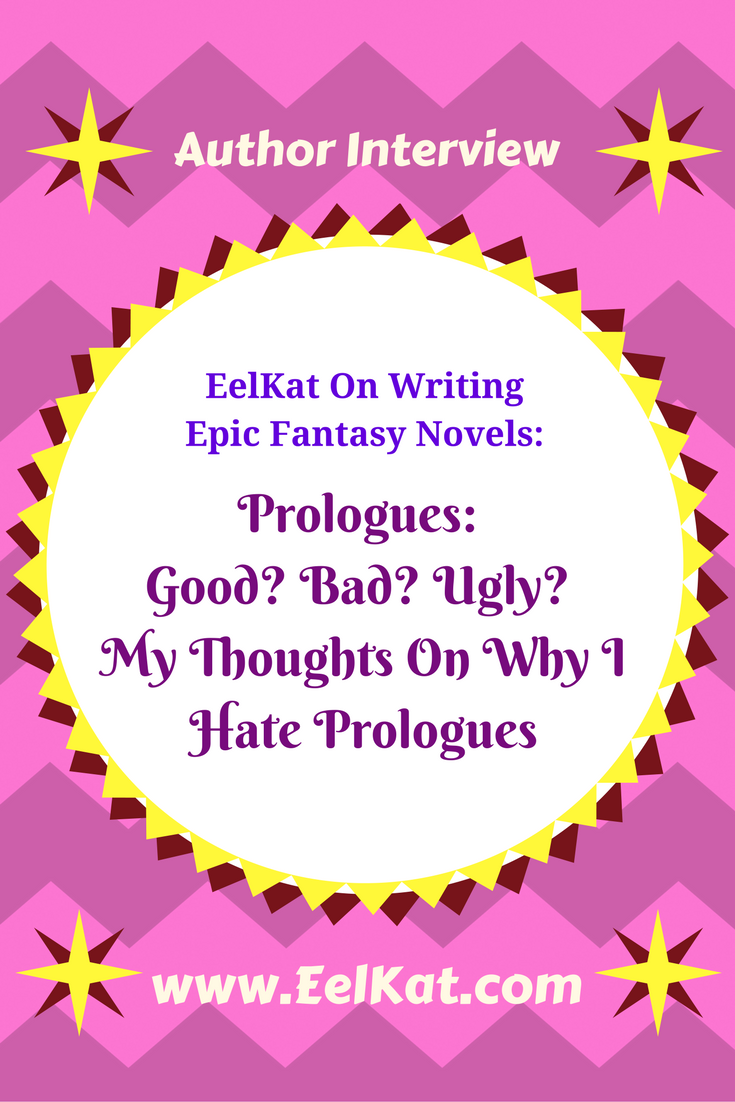 Thoughts? On Prologues? Oh let's see. Where to begin?

I don't read them. I've never read one in my entire life, and I've few thousand books. The way I see it, if it wasn't important enough for the author to include it as part of the actual story, then I'm not gonna waste my time reading it.

I also often skip most first chapters, because I get bored out of my mind with the blah, blah, blah of ye old descriptions of ye olde town.

I also skip all those cutsy paragraphs written in Latin, Elvish, Dwarvish, and Klingon.

I also skip everything written in italics because I'm blind in one eye and italics are just a blur because it requires two eyes to focus on italic print.

And as I wanted to read a novel and not poetry, I also skip all poems, songs, and stanzas found within the novel. I'm not a fan of Hobbits dancing and singing for 25 off topic pages, for no reason at all other then the author wanted to show off with "Hey, look, I can write poetry, watch me stick it in my novel here for no reason at all! yay!"

You want to know how much I hate Hobbits singing and reciting poetry in the middle of a novel for no reason at all?

Here, have a scene from the Quaraun series, written in tribute to Lord of The Rings:

"What is that god forsaken noise," Quaraun moaned.

The Elf was slumped face down over the table. Unicorn wasn't sure if Quaraun was drunk, tired, sick, or all of the above.

"It a wee lil Halfling," Unicorn answered. "Him signing himself up a storm."

Unicorn slid out of his seat and went to the Halfling's table. The tiny little humanoid was dancing gleefully, in between singing and reciting poetry.

"Me Elf be wanting ya to shut ya wee lil trap," the old undead Phooka said to the Halfling.

A few moments later, Unicorn returned to Quaraun's table and once again sat down beside the Elf. Quaraun was still slumped over the table and had not yet looked up.

"I can still hear him," Quaraun muttered through his hair.

"Aye. Him say ya was nothing but a no good son of bitch arrogant High Elf. Him told me to tell ya to fuck yaself."

"I have a headache."

"It means I want that fucking piece of shit to shut up. I didn't come here to listen to poetry. If had wanted to hear poetry recited I would have come to a theatre. I'm trying to rest."

"I could fuck ya better in a room. More privacy."

"I could fuck ya here at de table."

"Yeah. I know dat suppose to be threat, but I probably would like dat. So dat not incentive for me to no fuck ya on table."

"I just want that singing wretch to shut his fucking mouth."

"Dat be a long poem him singing. Will take him an hour to get t'rough it."

Unicorn got up and once again returned to the Halfling's table. This time he stood and silently watched the tiny creature as it merrily skipped and danced on the table, in the beat to it's sing-song poetry recital. Unicorn walked slowly around the table watching the little creature's every move, listening to the song, picking up on the cues of his movements.

After a minute or so, Unicorn stopped moving and stood, silently, watching and waiting for just the right moment, and when that moment came, he swiftly pulled his machete from his hakama and lopped off the Halfling's head. There was a brief shrill gurgle shriek as the last stanza of the poem was cut to an abrupt hault.

At the sound of the Halfling's dying breath, Quaraun looked up for the first time. He sat staring and blinking, uncertain if Unicorn had actually just done, what he thought Unicorn had just did.

Unicorn pranced back to Quaraun's table and plopped the Halfling's severed head in the middle of Quaraun's plate.

"Dair. Him no more sing," Unicorn said cheerfully, proudly beaming over his work.

"You cut off his frigging head!"

"Aye. Un now ya can add it to ya head collection."

"I don't have a... oh." Quaraun reached into his bag and pulled out Gibedon's head. "I forgot about that. Why does everybody keep losing their head around me?"

BeLuna entered the tavern just then, back from her errands and was about to start one of her usual conversations with Quaraun when she saw the Halfling's head.

"Quaraun, why do you have a head in your plate?"

"Why do you say that so calmly, like this is normal every day thing to happen to me?"

Before Quaraun had a chance to answer, Bullgar joined the trio.

"Quaraun!" The giant Dwarf boomed. "There's a head in your plate!"

~From "The Journey Begins" (Volume 4 of The Quaraun Series)

I always thought that a prologue and epilogue were nothing but an arrogant author showing off how big his ego was, with a whole:

"Hey, look, I know you are too damned stupid to figure out how great my novel is, so let me tell you all the great crap about my novel, that'll you'll be too stupid to figure out because my IQ is shooting out my ass and your IQ my dear stupid little reader was flushed down the gutter. So here is a prologue to prove you're stupid and I'm smart, because I know you'll NEVER figure out all those great stupendous cryptic meanings I hid all through my novel."

Every time I see a prologue I just roll my eyes and think: "Oh, boy, here's another holier then thou dip shit, do I dare read this book?"

These days, I'm likely to skip even buying a book if it has a prologue, let alone read it. ESPECIALLY if it's self-published, as it's become a trend of late for authors to let their egos loss in prologues.

Newer self-pubbed books these days have prologues that are insanely long. 50 pages is fast becoming the norm, and I've seen longer ones.

My belief is, if the author feels they have to explain the details of their story, outside of the story, then that author is a very poor writer and in desperate need of taking some writing classes so they can learn how to tell a story and include everything the reader needs to know, woven within the story.

I would like prologues if they did what they were supposed to do, and BRIEFLY in 2 pages or less, introduce the setting of the story. But I don't want to read 50 pages of an author explaining how they did their research to ensure that we stupid readers know the difference between a cave man and a neanderthal, followed by explanations of all the hows and whys of the ice age and its effect on the story, followed by the author listing off all their degrees in anthropology, and which digs they dug at, blah, blah, blah. I bought the book to read the story, and if I want to know the history of how and why they wrote it, I'll head to their website and read their "About Me" page.

Far too many authors use their prologues as a way to talk down to their readers and, I wanted to read a story, not be lectured by an arrogant author.