Home / About / Keep it Professional


How can you build an online presence that would generate interest to publishers?

How can you build an online presence that would generate interest to publishers? from writing

Comment from discussion How can you build an online presence that would generate interest to publishers?.

How can you build an online presence that would generate interest to publishers?

>>WARNING: this bullet point is long but really important. Two words: BEHAVE PROFESSIONALLY. Don't shitpost or trash-talk other authors or genres (you can review books, you can talk about important topics like diversity in fiction, but for the love of Dog don't join call-out culture). Don't moan about agents or the submission process or publishing industry. You want to come across professionally, and professionals don't shit where they eat, burn bridges, insult potential business partners or colleagues (other writers are your colleagues, yes, even Dan Brown, Stephenie Meyers and E L James) or do daft things like say the reading public is stupid for buying certain popular books or that YA readers should read proper books. (Remember C S Lewis' maxim about childish things and that maturity is being accepting of other people's tastes, not looking down on them.) If you have opinions on the state of publishing or a contract you've been offered, save them for private conversations (and even then be incisive and focus your critique rather than insulting) or for private negotiations. Don't splash across your blog that Penguin are greedy bastards and your agent is a moron for taking their offer. Don't publicly insult the agent who rejected you at a conference. Remember, you're a businessperson when dealing with publishers and you need to learn the decorum and discretion you'd apply to any other professional situation. And it starts before you get an agent. Rejection is hard, but keep your frustrations to yourself.

I'm always amazed by what I see on the /r/worldbuilding sub. There are bitch feast fights going on constantly, my world better than your world type stuff...

People use fake id usernames, then write huge details of their worlds with all the names of places and characters... and then doing their snarky angry bitch fest in the comments of someone else's world... and they think no one can identify their real names just by looking at the info about the world they built? 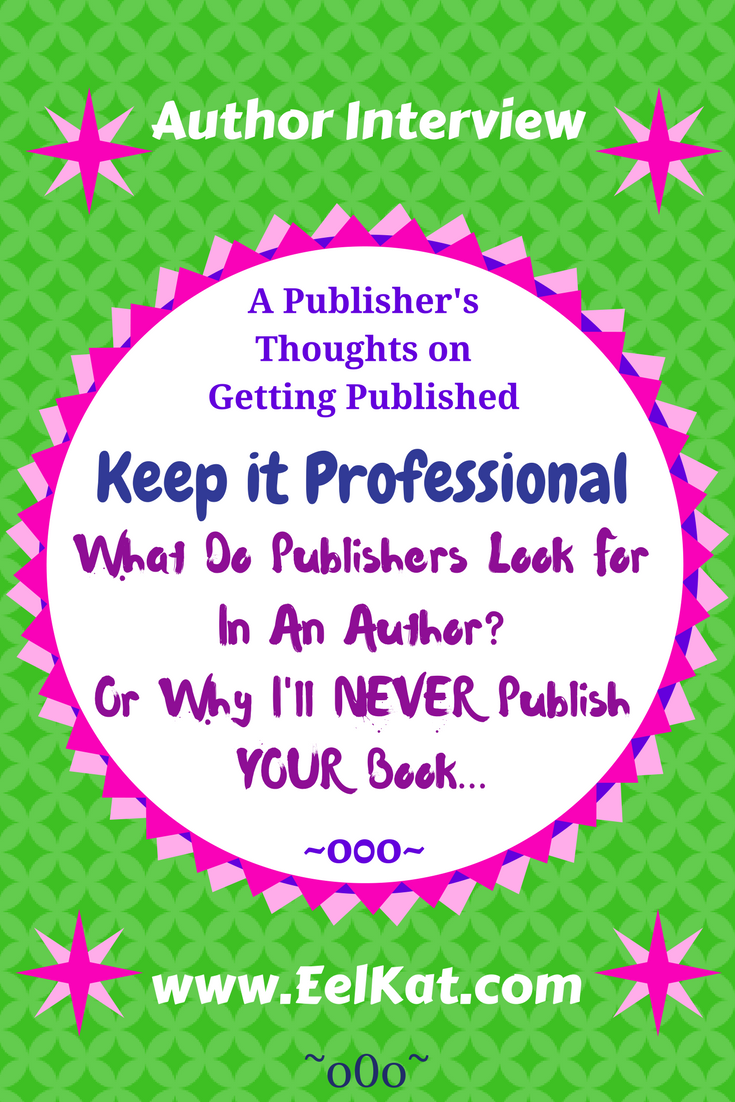 I asked a guy about that once... he was lashing out major troll fest of hell fire at another author... and earlier that day on the same account, he'd mentioned he was trying to get his novel in front of agents... I pointed out to him... if an agent's interested in your novel, and they do a Google search of the place names and character names from your world, (which we do to make sure you are not copyright infringing some world we may not have heard of yet) the top thing the agent is going to find is your posts here on Reddit's worldbuilding sub. Do you REALLY want that agents to see what you are saying right now?

He said: "It's okay, I'm using a throwaway username, she won't know it's me"... uhm.... it doesn't take much to see the world on his account is the same world in his novel no matter what user name he uses.

Plus... I recognized the name of the agent he was talking about and knew she happened to use that very sub, and likely was watching him as he was having that troll attack on the other person.

My response to him was: "A lot of big name authors, editors, agents, and publishing house employees are members of this sub. Are you aware that I am the owner of a publishing house? And the editor of two magazines? And come to this sub specifically to see the posting habits of authors who submit to us? We prefer to work with authors we know can smile under stress, turn the other cheek, and not give our publishing house a bad name. Do you really think we would want to work with someone who acts like a 2 year old and can't be trusted to ALWAYS be a professional in public, no matter the situation, AND no matter WHICH of their accounts they use? You're lack of professionalism, isn't impressing any of us, and it certainly doesn't make any of us want to publish you. You're not nearly as anonymous as you think."

And people who use "throw away accounts"should probably be informed of the fact that anyone with Chrome can do a simple ISPN check to match up ALL your Reddit accounts, all your social network accounts, everything... those so called "throw away" accounts on Reddit are not nearly as anonymous as people think, and I currently OWN a publishing house... we DO check your online presence before we decide to work with you. Heck, most businesses are hooked up with some kind of background check company that can hand over your criminal records, juvie records, traffic tickets, etc in a matter of minutes. And have you ever seen one of those background check reports? They include a list of your parents, grandparents, siblings, cousins, aunts, uncles, your past employees, and your last 14 addresses too. The contact info is everyone on the list, so the business can contact them and ask for references. They are very in depth.

Far too many people do not take their writing career seriously. They think of it as a hobby that will someday get them published. They don't think of submitting manuscripts in terms of job applications, but that's what it is. You sending a manuscript to a publishing house, is you asking to be hired by that publishing house. You work for us, writing books, that we publish. Why do you think you get PAID? Because writing novels is a JOB.

So many authors do not treat writing like either a job or a business. They think they are doing us publishers a favor by sending us manuscripts. No. Your manuscript is your job resume. We search it for professionalism. Your cover letter should read no different from the resume you give to WalMart. It doesn't matter if you are applying for a job at WalMart or sending a publishing house a manuscript... either way, that's you asking for someone to consider paying you to work for them. You stock shelves at WalMart, you write books for publishers. Either way, it's a job, and how you act outside of work, affects how your future boss decided to hire you or not.

A lot more then a poorly written manuscript gets authors rejected. Snark on Reddit, nude photos on FaceBook, ....

You want to see a chronically unpublished author who can't get published... go to NaNoWriMo Forums. State of Maine Regional Forums ... look for the monthly "I hate EelKat" threads. As well as the other authors she does this to. You want to see a perfect example of how to NOT be a professional, written by an writer who shot her career in the foot and will NEVER be published EVER by ANYONE, go read those. You want to kill your writing career, act like her.

You want to be published... learn from her example and don't do ANYTHING she does. That includes:

These are all things that you as an author, should not do.

And yet one author, did ALL of the avoe and more, to me. And I still don't know why.

I'm out of the wheelchair, after being paralyzed 5 months, it took me 18 more months to relearn to walk. She did that to me in 2013. I'll be on a cane the rest of my life.

I could go on 200 more things that she did to my family, but you get the idea. To date, that one author has posted MILLIONS of online posts on NaNoWriMo, KBoards, AbsoluteWrite, Reddit, and more, her bitter vehement hatred for every author. In her own posts she stats that EVERY author is "out to get" her, that ALL authors are trying to kill her careers, and as she puts it "it's kill or be killed, I have to kill their careers before they kill mine!"

She killed her career herself, by using forums and social media as a weapon to try to hurt other authors.

Rather then seeing other authors as her comrades, she saw them as her enemies. Rather then working with other authors, she tried to shoot them down and crawl to the top over their dead bodies.

Since 2006, this one author, has been doing this, to several authors, editors, agents, and publishers... According to the FBI agent in charge of the attempted murder case... I'm only 1 of 73 authors, editors, agents, and publishers she did these things to... and then she wonders why NO publisher on the planet will even consider her books, and MOSt publishing houses have her name on a "watch list" for automatic rejection, should she submit to them.

She thinks she's anonymous... but my local police department was able to find out her real name and home address less then an hour after she taped a death threat to my front door.

Don't do what that author did.

If you can't be a professional, don't be an author.