The most original book of all time, and why that's not desirable

The most original book of all time, and why that's not desirable from writing

I'm someone who never understood the deal to strive of originality. Though I suppose when you hear my reason for writing, you could probably say it was for originality! LOL!

My reason for writing is quite simply, that I have very specific things that I want to read, but I can't find them.

Well, saying that, then makes it seem like I must be striving to be original, right? 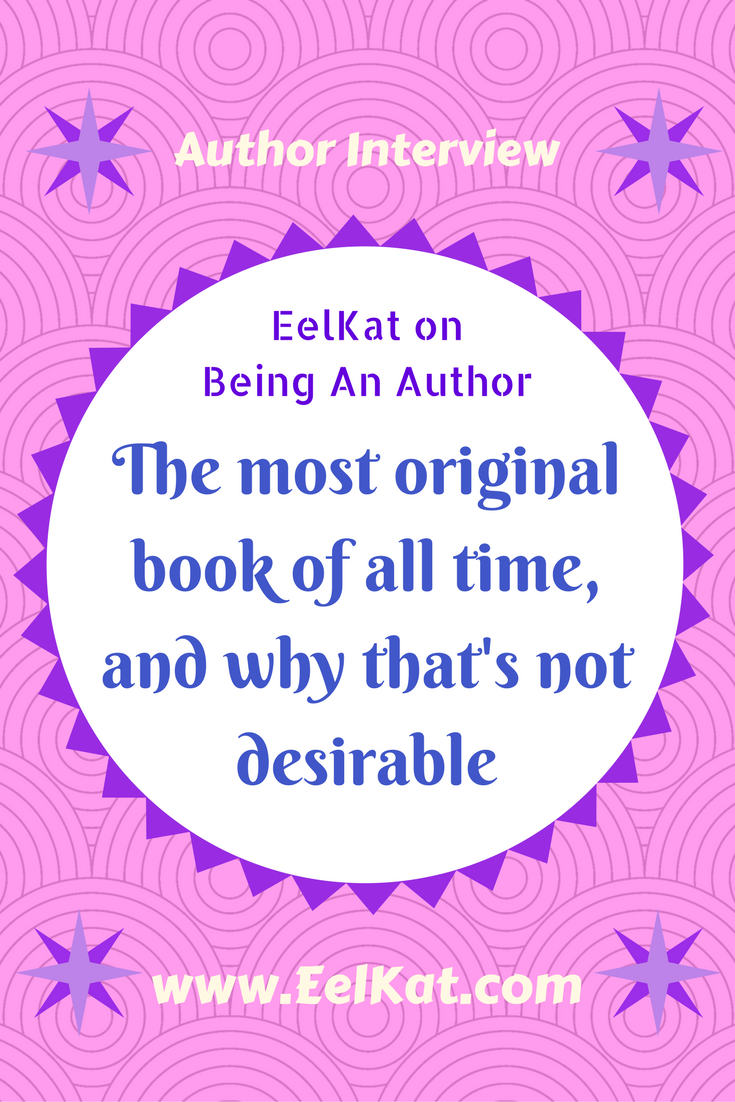 I wanted Gypsies put in leading roles and treated like people. Original? No. Within Gypsy culture, Gypsy authors write Gypsy characters that accurately represent real Gypsies. (And no, Romani are NOT Gypsies. Romani hate being called Gypsies every bit as much as we Gypsies hate being called Romani.)

The thing is there are more then 50 different races, groups, cultures, and ethnicities which get called "gypsies" (not capitalized), but there is in fact a group accurately called Gypsies (capitalized). Each of those cultures is VERY different from one another. And MOST of the things attributed to Gypsies come from those other groups. (For example Gypsies do not dance, dancing is taboo, the women dress similar to Muslims with modesty and hijab, they are pasty white, almost albino, but have frizzy afro wool hair, they are farmers on settled land and are NOT nomadic, they do not play music, music is taboo.... all of these things are contrary to what most Americans think of when they think of Gypsies.)

Real Gypsies, the group correctly called Gypsy, was a group of Hebrew men who married Persian women and were cast out of the House of Israel, sent to wander in the desert, cursed by god for the sin of Jews marrying Muslims. Cast out by Jewish society and Muslim society, they fled to Egypt where they were called "Gypsies - the people who lived with the Egyptians". They are Jewish-Persian(Iranian) half-bloods with no relation to the Spanish, Indian, Italian, Turkish, or Romanians who are commonly inaccurately called Gypsies.

I wanted to read about transvestites. REAL transvestites, not the stereotypical "she-male" of Erotica. A transvestite is a man who does not believe clothing has gender and wears mens and women's cloths equally. He is NOT trying to be a female, does NOT use male pronouns, but does wear dresses. How often do you see that? If you see men wearing dresses, they are cross-dressers tossed in for comedy releif, or they are transexual, men who are in the process of transitioning into women and use female pronouns. Try to find a transvestite who is not either comedy relief side kick in Chick Lit or a sex object fetish in Erotica... try finding a transvestite portrayed as a real live human being and used accurately as a main character. They are out there but such books are few and far between.

Then there are Elves in Medieval Europe. I love Elves. I love Medieval Europe... but sometimes you just want to know... so what were the Elves of ancient Egypt like? What will Elves be like in 2525 America?

Then toss all 3 of the above into a single story. Seems original, right?

But then you look at what I write... if you start taking it apart... you can no originality at all.

The story pulls heavily from ancient Persian folklore, Koran mythology, Jewish mythology... things that are obscure in American modern literature, but are classic literature of their respective cultures.

I built a Fantasy world with a magic system built off of Persian folklore and thus instead of witches with familiars you find desert magi with di'jinn. While most of America thinks "she-male Las Vegas mega slut feather dancer" when they think transvestite, instead my main character is a very modest man who wears kaftan, ajilba, and hijab (the long flowing embroidered silk clothes worn by Muslim women in Persia). He's heavily veiled, only his eyes can be seen, as is accurate to a transvestite of Persian culture.

The story is about the persecution of Elves, and their escape to the New World (colonial America/Canada). The story takes place in the northern frozen wastes of Quebec... a stark contrast to their native deserts of Persia...Displaced Persian Gypsies, marooned in the New World, exactly as they were in real life.

None of this is original or unique... all of it draws on real world history, and the folklores of the cultures that inspired them.

I think, the trouble with calling a think unique or original stems from the person's culture...

For example, in 2012 I was in college and we had to read a story, then discuss it. The story was about 2 boys, one from a wealthy family, the other from a poor family, but both liked to run off together and play on the subway. One day one of them is killed by a train on the subway.

The class discussed many things about the story... after a bit the teacher asked why I had not said anything, because usually I had all sorts of opinions...

I responded with this:

"I don't understand why they were riding on sandwiches or how a train came out of the sandwich and killed them."

The discussion immediately changed to culture shock as several students, realized, I did not know what a subway was and the only subway I had ever heard of before was subway sandwiches. That there existed trains in underground tunnels or that they were called subways, was lost on me as I had never heard of such a thing before.

In my mind, the idea of an underground train was new, unique, and original. Yet every one else in the classroom had grown up in America and knew that such a thing was just a normal every day part of society. It was new and unique to be because I came from a culture where such things were unheard of.

The same is true of the books I write. I have had several readers contact me about my books and they comment on things that are "unique" or "original"... like the way Gypsies are portrayed... readers will say: "That's so unique, how did you ever think to have Gypsies act like this?"... this sort of question always baffles me, because I am a Gypsy and the characters are NOT doing anything unique or original, but rather they do the same things my family does every day. But because few readers encounter a Gypsy, they don't know that.

So for them, it's like the subway was for me.

In both cases, neither thing was original. Subways are a part of American culture so they show up in American stories. No American thinks a subway is unique or original, yet, I did, because we have no such things in my culture.