Age Difference In Marriage: The Fiction VS The Reality | Novel Writing Tips

Platonic or Romantic? from writing

>If a romantic relationship, how far apart in age can two characters be in order to make the relationship seem, less awkward?

About the age difference thing... my husband and I have been together since 1987... he is exactly 30 years older than me.

My dad is 13 years older then my mom.

My grandfather is 17 years older then my grandmother.

One of my uncles is 27 years older then his wife.

One of my cousins is 42 years younger then her husband.

One of my aunts is 33 years older then her husband.

One of my uncles is 24 years younger then his wife. 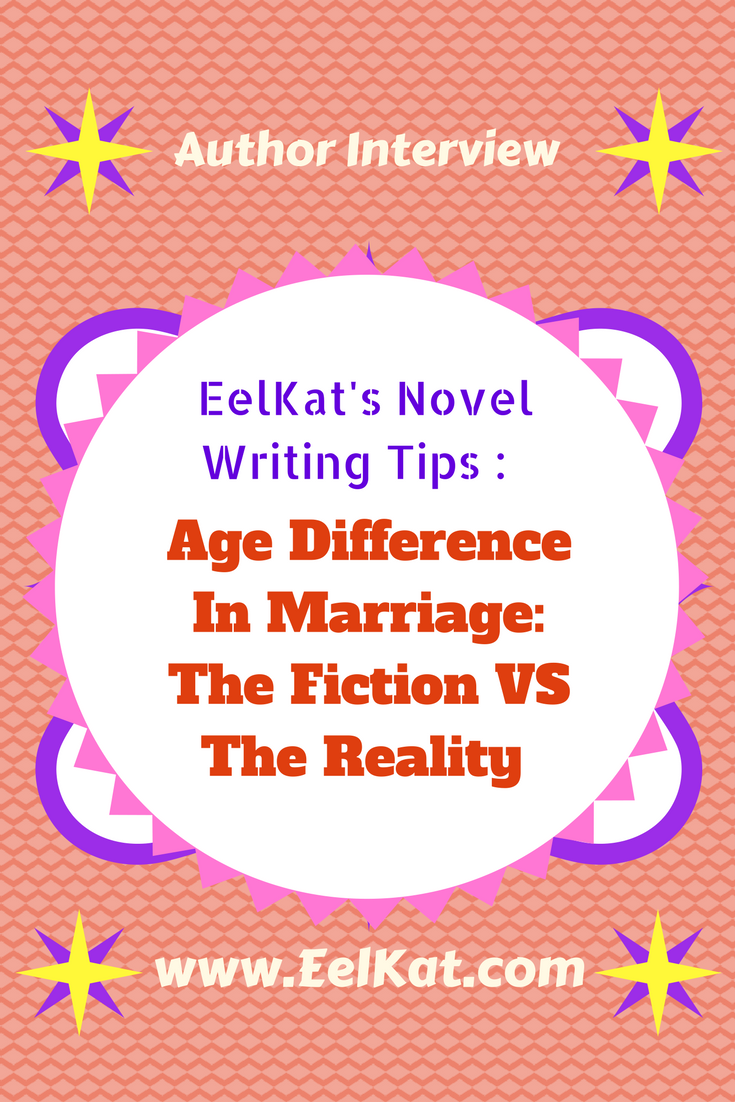 The divorce rate is HIGHEST among couples who are 2 years or fewer apart, with their chances of being married more than 6 months before divorce, very slim.

Statistics also show that the closer in age the couple are, the more they fight, with the physical violence level increasing the closer in age they are. With couples of 2 to 3 year age difference, have the highest rate of domestic violence, spousal abuse, child abuse, and spousal murder while couples of 20 years or greater age difference having the lowest amount of domestic violence, with child abuse and spousal murder being very rare.

Studies show too, that the closer in age a couple are, the less respect they have for each other, thus the more each pushes the other around, while the greater the age difference the greater the level of respect for personal space.

Also interesting to note is that couples with a close age of 5 years or less, have a tendency to share a single bedroom, while couples of 10 years or greater tend to have 2 separate bedrooms. It is believed that the ability to have private time away from their spouse, by have separate rooms, is the case of the lower violence and divorce rate as separate rooms allows each to have their own personal space.

Also, couples with a close age tend to have 1.5 children per couple, while couples with a 10 year or greater age difference have an average of 8 children. (How you can have .5 children is not something I understand, but that's what the study said 1.5.)

One study pointed out that couples with a close age range, tended to not be either spiritual or religious, while couples with a large age range were highly devoted to their religions. Religions with the greatest age difference and lowest divorce rate were: Muslim, Seventh Day Adventist, LDS/Mormons, Mennonites, Amish, and Jewish. In each case the religion itself preaches/promotes women marrying before the age of 18, while also teaching men abstain from marriage until at least 30, thus promoting an average age difference of 15 to 30 years apart in the bulk of each religion's membership. This particular study concluded that adherence to one's religion and being very devote, played a part in why couples with a large age difference, also have fewer divorces and less violence as well as less drug and alcohol abuse.

If you start researching it, there have been a few hundred scientific research studies done into the importance of age in relationships, and it's quite a fascinating study once you start looking into it.

(I did a paper on age difference in marriage, across various cultures, in college in 2013. It was one of the most fascinating things I've ever had to research. If you've ever read any of my books one of the first things you notice is a heavy emphasis on the particular cultures marriage habits - this is why I write like that. I'm just fascinated with marriage styles of various cultures, especially polygamous cultures. It always saddens me how polygamy is often fetishized in fiction, but in real life polygamy is dramatically different than the way most novels, movies, and tv shows portray it. Which is why you also see me generally writing polygamous main characters, as well.)

In other words, you shouldn't worry about age difference. In fact if you have them too close together in age, statistics prove they are doomed to early divorce and a failed relationship. The greater the age difference, the higher the chance of a happy ever after in the real world. Only in fiction and fantasy are couples with an age difference of 10 years or less either happy or believable. The real world couples have much bigger age difference then fictional media would have you believe. Thus your couple becomes a more realistic and believable couple, the greater their age difference, not the other way around.

Do you prefer romance/friendship arcs to start with the two people hating each other? Or beginning with something else? from writing

Do you prefer romance/friendship arcs to start with the two people hating each other? Or beginning with something else?

>I'd rather see friendships arise out of common interests and mutual respect.

>I'd rather see romance arise out of long-standing friendship.

>I'd like to see friendships and romances between functioning adults, you see.

>Fair enough. Let me rephrase, then: would you prefer friendships and romance arise out of two characters who are in conflict with each other? (ex. opposing interests, rather than outright hatred)

>Where are the relationships where two people have a lot in common and develop feelings naturally? Is that so boring?

Relationships based on common interests are so extremely unbelievable in real life, that's it's difficult for authors to imagine they'd even be believable in fiction. You can't expect reader to suspend belief THAT much could you?

>I like to see enemies-to-lovers stories. Friends-to-lovers I don't mind if its done well, but more often than not it bores me. Friends don't push boundaries as much as enemies or rivals do, and when they do push the boundaries it ends up with them not talking to each other for some time. I feel like enemies or rivals know each other very well, or at least know things that friends usually don't. You dont have to beat around the bush with all that. So that's why I like it more.

>Personally, the enemies to friends to lovers (or even just enemies to lovers) is so overdone and just reminds me of Hallmark Movies. It's so easy to write because the conflict is obvious.

>I like friends to lovers, but I can see how that gets boring. I also love reading opposite attracts couples that would never work in real life. The conflict stems from differing world views, different values, rather than outright hatred.

>Agree, Enemies to lovers is the WORST.