How many hours to write a short story? |
EelKat On Writing Short Fiction

Just curious. How many hours or revisions do you typically put into your short stories? After a certain point, would you decide that it's too much time and just cut off, for example?Harlequin

When I was doing short stories full time (before health issues got in the way) I had made it a goal to publish 1 a week (52 a year) and usually ended up with around 30 a year instead. My method then was to spend a day writing a story, and then spend the rest of the week editing it. 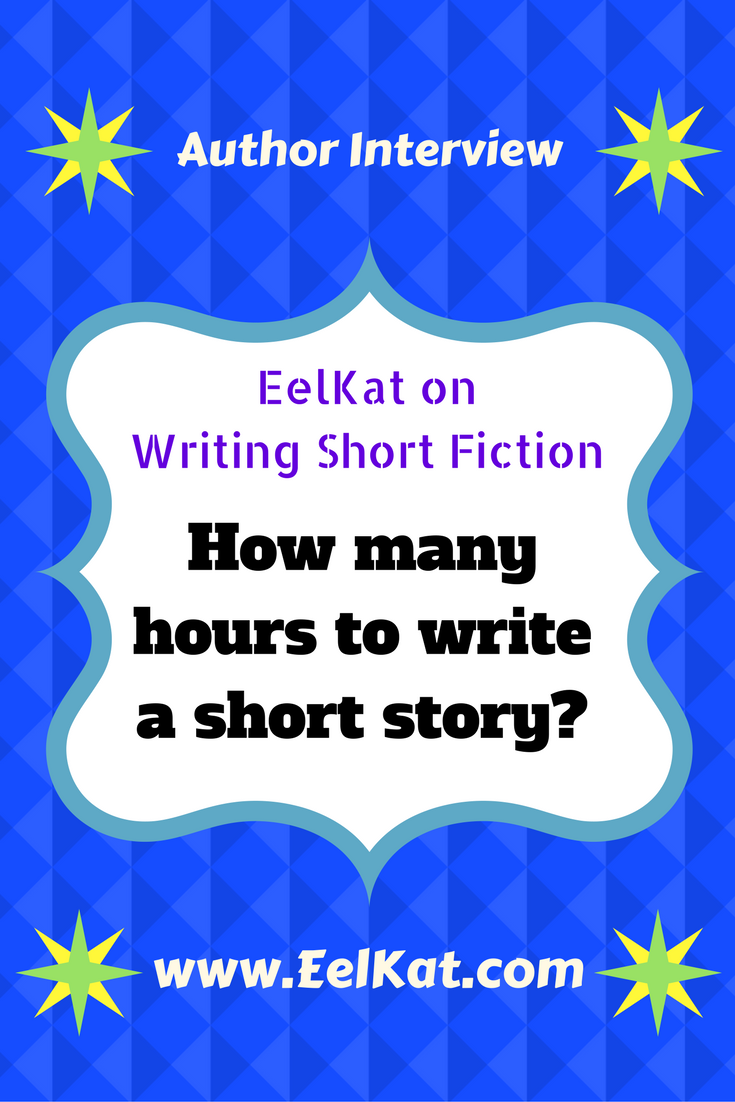 Usually I was writing the first draft in about 8 hours, then spending about 4 hours a day for 3 to 5 days editing. So total hours was about 24 hours of actual work, to have an end result of a story anything from 2,000 to 10,000 words long. Most were around 4,000 words.

When I'm doing the 8 hour fiction contest, which I tried to do every month for about a year, you are only allowed 8 hours to write, edit, format, make the cover, and publish to Kindle the story. My 8 hour fiction entries are usually only around 1,000 words because of the limit in time to work on them. It's really hectic though. There are people who doing it weekly and daily - I don't know how they do it. I struggled to do it once a month! LOL!

I don't think there is a cut off point of when to give up on a story that is taking too long to write.

Perhaps if you are having trouble, maybe it just means you need to set it aside for a couple of weeks and work on something else. Then go back to it later and maybe you'll see it from a new perspective and see something you missed?

I've done that before. Had a story, I just couldn't get written. Set it aside and write a few other stories. Then about 2 years later I thought of a story and I was like: "Wait... didn't I already start a story like that?" Yep. That one I set aside. Turns out all it needed was for me to forget about it for a while and then think up a new idea to add to it.

It varies a lot. I've written flash pieces of around 1000 words in an hour, edited them in the next hour and sent them off. Up to 5000 words I can generally get all done start to submission in a day. I rarely spend more than two days on any short story, and at most they get 2 drafts then a final polish before going out the door.

So, for me, I look at the 400 flash fiction story totalling 400,000 words in a year, and think that, really not that much when you look at the numbers... not when you are talking about someone who is writing full time and doesn't have an outside job taking up their time. It's a lot if it were longer works, or if you were talking about a college student mom trying to write between family, classes, and 2 jobs.

My point is... you can't just look at the numbers, you have to look at the person behind the numbers. Someone with years of practice has a ritual habit schedule that helps them flow quickly through the process, someone new to writing hasn't yet gotten their optimal flow situated yet. Someone with multiple jobs and small children has less hours per day to write then some one (like myself) who is a retired senior and has nothing but time to write all day long.

We each work at different speeds, different flows, and against different life situations. Some of us only have an hour per day to write, others have nothing else but writing to do. All these factors make a difference in each person's output.

If you head to reddit there's a sub over there for writing prompts, and it has 11million members, and if you start reading the daily submissions, you start to notice there are flash fiction writers over there who are posting 1 or 2 or 3 or 4 or more short stories a day. (It's a subreddit where people post their daily flash fiction for others to read). They way surpass 600 stories written in a year and there's a LOT of them doing it. (And not getting paid either... I'm surprised, more of them don't seek to get published because a lot of it's really good, but they say they aren't interested in writing as a career, they just want to share their work online.)

So, yeah, 400 flash fictions in a year, not really that big of a number when you compare it to a lot of other writing out there. It's all about perspective and who and what you are comparing it to.

yes... so the main thing I take from this thread is that it shouldn't take me so long :p

I think I know when I want a story to work, but that's not of course the same thing.Harlequin

Nah. Everybody works at their own pace, with the time they have available, around the life and family responsibilities they have. There's no right or wrong answer here. Don't compare yourself to others. Everyone's life situation is different. Every one's experience level is different. There's no such thing as writing too slow or too fast. The only time you can be writing too slow is if you are working for a company and you are missing deadlines - say a newspaper reporter - the boss isn't gonna hang on to a reporter that submits a news story a week after it happened. But if you are not working for someone else who gave you a deadline, then, no, don't worry about it and just take your time. No reason to rush it.

I think the worse thing we can do as authors is try to compare ourselves to other authors. It's way too easy to look at someone else's output and say: "That should be me, why can't I do that?" But we don''t know the other person's situation. We don't know what their training, experience, school, work, family, health, and life situation is. Just because they are writing the same genre as us, don't mean they have the same life situations as us. There are just too many variables for any author to compare themselves to any other author. We have to compare our current output with our life situations and not with what other authors write. Plus being very prolific and writing lots of words is not always a good thing either.

Me, when I was doing the 52 stories in 52 weeks thing, I was writing short stories as my full time career. I had to be putting out a high number in order to pay the bills. But most people who write short stories are not doing it as a full time career and can work at a much less hectic pace. And it was a very hectic pace for me, which is part of the reason why I don't do it anymore! LOL! It was just draining physically, mentally, and emotionally to try to keep up with that sort of pace. Sure I put out a lot of work, but looking back it wasn't always my best work because it was rushed.

These past few years I write much slower now than I did when I was younger and am only publishing stuff every couple of months instead of every week now. Which gives me more time to do other things. And that's something to consider as well. The more time you devote to writing, the less time you have for other things.

I should add that I might think about a story off and on for months before I sit down to write it. I am only counting the time from when I start writing. By then I have decided exactly what happens in the story and how long it will be.0veinglory

Yep, me too. I keep a notebook full of ideas so that I don't forget them. It may be a year or more before I get around to actually writing the story after I've thought of it.

Be a unicorn, write Yaoi, have a glorious sunshiny day!
I live where pink unicorns eat butterflies & poop rainbows.
I WRITE about books and writing.
I VLOG about books & writing.