Should I use capital letters when... Grammar Rules: American English vs UK: Capitalization In Fantasy Novels

Should I use capital letters when...

Should I use capital letters when... from writing

Should I use capital letters when...

>>Should these words be capitalized (and what is the rule here?)

The rule depends on what type of English you are writing. It's different in different countries.

Uk/British English is the ACTUAL/OFFICIAL English language, so the only truly correct way to spell words and use grammar is if you are using UK/British English. However, as the bulk of Reddit users are Americans, you will notice that you have received a lot of (very incorrect) answers, being given to you as "correct grammar rules". These rules are correct only in America, where grammar rules are lazy, lax, and inconsistent. 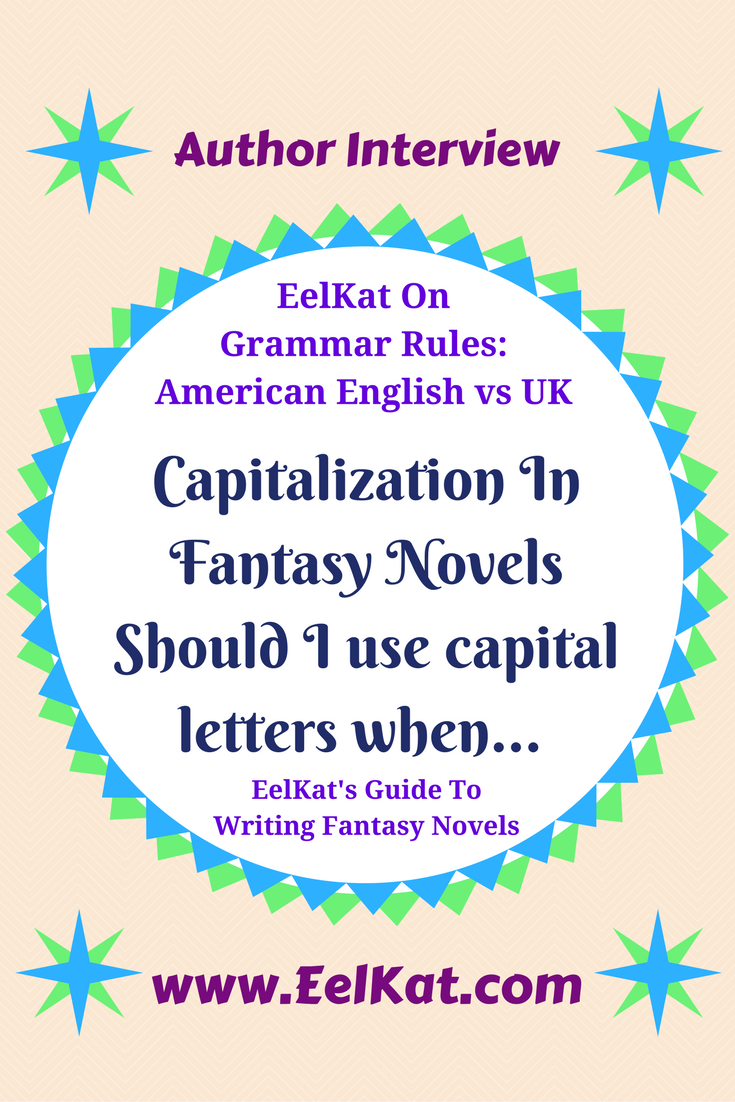 There are more the 70 official types of English, each of which has different spellings and different grammar rules. A few of them are:

Each of these types of English has vastly different spellings and vastly different grammar rules, and none of these is incorrect. Yet, in America, where arrogance reigns supreme, you will be attacked viciously by people who call themselves "grammar nazis" if you use anything other then American English, in spite of the fact that American English, ironically is the version which strays the farthest from the original version (UK/British English) and has the least in common with ACTUAL English (aka UK/British English).

British English is the original, from whom which all other forms of English come from, so if you are a stickler for accuracy and what to know the actually official rules of the English language, then you want to look to UK/British English grammar rules.

But in any case, this is why you are seeing so many variations of answers being given to you be so many different people. Each answer you've been given, though different from each other answer, is actually a correct grammar rule for the type of English spoken by the person who gave you the answer.

If you are aiming to market your book to an American audience, you'll want to go with American English, which will make it easier on you, as American English is extreme informal and tosses out the window, most of the more strict rules of the English language.

So, you have 3 options when writing your book:

Which road you take is entirely up to you and none of these choices is wrong.

>>Lycan (like werewolves. I originally thought "no" since we don't capitalize "humans" when writing. Just want to verify, because i've seen it done in paranormal and scifi books).

In American English, you would not capitalize names of races, species, ethnicities, and cultures, but in Ye Olde Medieval English, Canadian English, Irish English, Welsh English, and Scottish English you do.

In other words, a book written by an American, the spellings would look like this:

But a Canadian, Irishmen, Welshmen, Scotsman, or someone in Medieval Europe, would spell those same words this way:

Usually, if you see such words capitalized, it almost immediately id's the author as being from Canada, Ireland, Wales, or Scotland.

I am myself Scottish, so I grew up being taught to capitalize such words, and I was in my 30s first time I encountered writing that DID NOT capitalize such words. At first I thought the author was a self-pubbed kid who didn't know grammar and hadn't bothered to get their draft edited, but then later I found out that the rules of American English were DRAMATICALLY different from UK style English, and that American English grammar follows after French grammar and German grammar rules, and applies a blend of French and German rules of grammar to English words, which is rather odd, I think. Why doesn't American English use English grammar rules? I don't know.

Thus in my own books you see all races capitalized:

If you pay attention to variations of spelling and grammar techniques, you can usually identify what country the author is from.

And, spelling and grammar rules change over time, so not only can you figure out what country and author is from, but also what year the book was written.

For example prior to the 1800s, pronouns were always capitalized. (If I wrote a sentence in which He said a lot of things to Her, You would see what I mean about how They used to capitalize pronouns that We today don't.)

Also in pre-Victorian grammar self-possessive items were capitalized with the self descriptive propoun. (For example My Horse is capitalized and so is Her Dog, as well as His Cat and Your Hamster, but the horse is not and neither is that dog, or this cat or those hamsters.)

So when reading books written in 1800s or earlier, you often see these types of spellings.

>>Words that in one context may mean something difference but in "my world" (that of the book) refers to a specific occasion or person. Example: Enforcer - which is a title.

In my own series there is a group of renegade self-imposed law enforcement (sort of a malita), that has an actual name, but the people they hunt down, refer to them as "The Guild". Both word ('the' and 'guild') are capitalized in this instance. My logic for doing this is because The Guild is a specific group, thus I felt it should be capitalized.

>>Assembly (in my book it is used to refer to a specific gathering. Should it be capitalized when referring to the specific assembly that everyone knows means this specific occasion, or always lower case?).

That is the way I do it as well... capitalize the group/event, but not the general use of the word.

In the end, go with whatever grammar rules you were taught in school. And if you can't remember, do the way the "feels right" and makes the most sense for your story. As long as you are consistent with whatever way you choose, - being consistent to your chosen method, that is the thing that I think is most important.